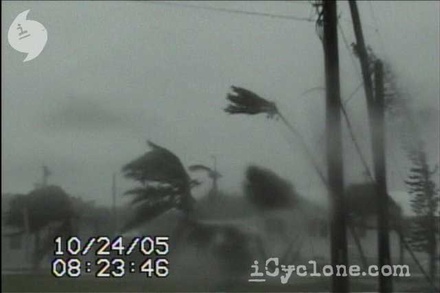 Founded by stormchaser and adrenaline junkie Josh Morgerman, iCyclone is the brand name under which he chases hurricanes and collaborates with others on weather-related projects.

The iCyclone team is a loosely-affiliated, cross-functional club of chasers, researchers, and meteorologists unified by their shared passion for Earth's mightiest spectacle: the hurricane.

The iCyclone mission has always been to penetrate, experience, and document the inner cores of hurricanes as they thrust ashore—via video, data collection, and blogging.

iCyclone's original chase turf was exclusively the USA. That changed in 2007, when Josh Morgerman singlehandedly hunted ferocious Category-5 Hurricane Dean on Mexico's Yucatan Peninsula—the only chaser to do so.

This splashy debut launched a string of solo, daredevil Mexican chases that have established Morgerman as the most prolific chaser of Mexican hurricanes and a specialist in this region. Since 2007, he's logged a whopping eight successful hurricane chases in Mexico—on both the Atlantic and Pacific Coasts—and in doing so has captured rare video footage and useful data for the USA's National Hurricane Center.

In 2013—when the Atlantic failed to produce any chaseable hurricanes—Morgerman and the iCyclone team expanded their focus to East Asia, chasing and penetrating the inner cores of an incredible four typhoons in just over a month—including Category-5 Super Typhoon Haiyan (Yolanda) in the Philippines. Recent high-profile chases include devastating Hurricane Odile in Cabo San Lucas, Mexico, in 2014; Typhoon Goni in Ishigaki-jima, Japan, in 2015; Typhoon Dujuan in Su'ao, Taiwan, in 2015; and the incredible Category-5 Hurricane Patricia in Jalisco, Mexico, in 2015.

Consistent with iCyclone's penchant for chasing difficult-to-reach storms in exotic locations—"the ones no one else will go after"—Morgerman has plans in the not-too-distant future to chase cyclones in Central America, Australia, and even Madagascar.