Howling Across the Rio Grande Valley

In July 2008, Hurricane Dolly churned across the Gulf of Mexico, strengthening as it approached the lower Texas coast. The Rio Grande Valley is not the easiest chase turf, but iCyclone was there—in tiny Port Isabel—to document events as the cyclone’s inner core moved ashore and the severe southwest eyewall pounded coastal communities. Dolly is a great example of the heavy impact that even a small, Category-1 hurricane can inflict.

It initially wasn’t even clear that Hurricane Dolly was going to hit Texas. It seemed entirely possible that the cyclone was going to pass S of the border and into Mexico.

And that’s what makes hurricanes approaching the Rio Grande Valley so tough to chase: you have to decide in advance whether to commit to Texas or Mexico—and you have to live with your decision, because by the time the hurricane is near the coast, it’s too late to adjust your position and cross the border if the storm changes direction.

Scott Brownfield and I talked for days as an anemic tropical storm named Dolly crept across the Gulf of Mexico, trying to figure out where it was heading and whether it would be chaseworthy. Finally, as the cyclone neared the coast and strengthened into a hurricane, we decided to place our bets on a Texas landfall—and we rushed to the Rio Grande Valley to meet Dolly.

On the night of 22 July, Scott and I hung out in a hotel room in Brownsville, carefully monitoring every radar frame as Dolly inched NW, toward the S-Texas coast. The Brownsville/Port Isabel area seemed to be a good bet—but the center was gaining latitude, raising the specter of a last-minute adjustment further N, to Port Mansfield. We finally forced ourselves to go to sleep—very important before a chase.

When we woke up a few hours later, everything was suddenly Code Red: Dolly had strengthened and radar showed it was suddenly hooking left, right toward the coast. The inner core was just an hour or two offshore! It was already quite stormy in Brownsville, with the wind whistling and the trees waving. We had no time to lose. 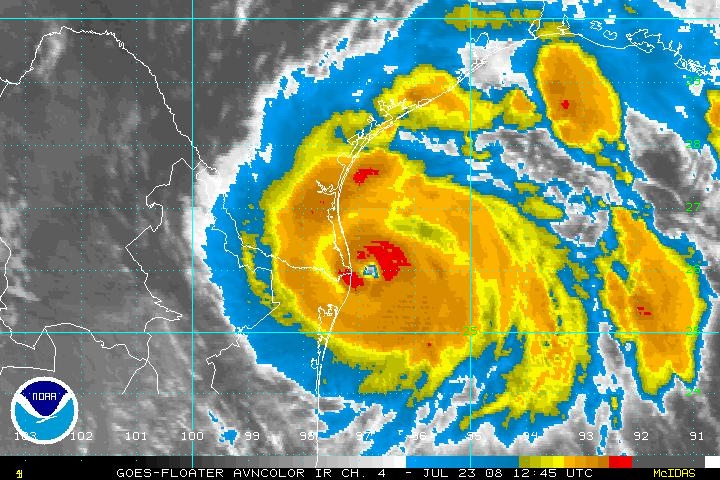 Gathering our equipment, we hopped in the car and headed E on Highway 48.

The weather was rapidly deteriorating as we approached the small port city.  The drive was tough.

By the time we arrived—at around 8:45 am CDT—Port Isabel was already being pounded by gales and torrential rains.  Our car shook as we idled in a parking lot, trying to decide next steps.

At around 9:45 am or so, the winds increased dramatically as a potent rainband swept the port—and the 10 am  NHC advisory indicated Dolly had strengthened to Cat 2, with winds of 100 mph (85 kt). Large, wind-driven waves were crashing up onto the shore, engulfing the stately palms that lined Port Isabel's waterfront. 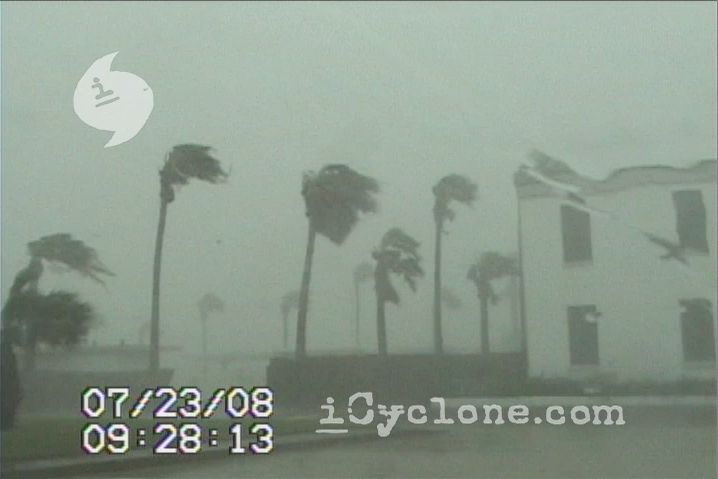 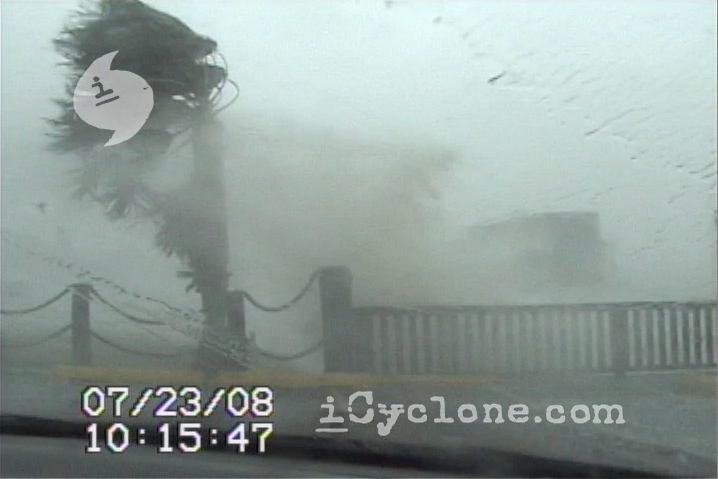 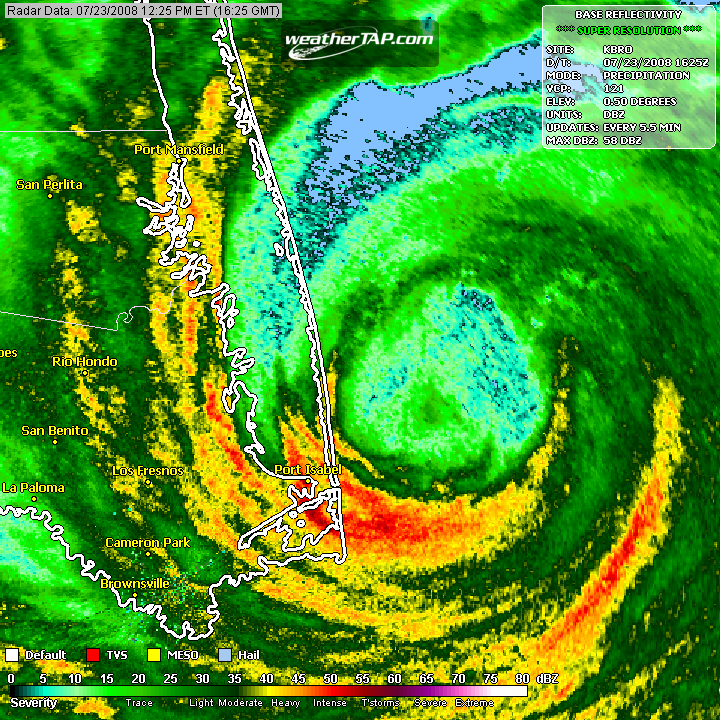 Stationed next to a closed Whataburger, we watched—and I shot video—as the gusts propelled metal scraps and a large sign down the street. The wind had a peculiar, ghostly howl to it. 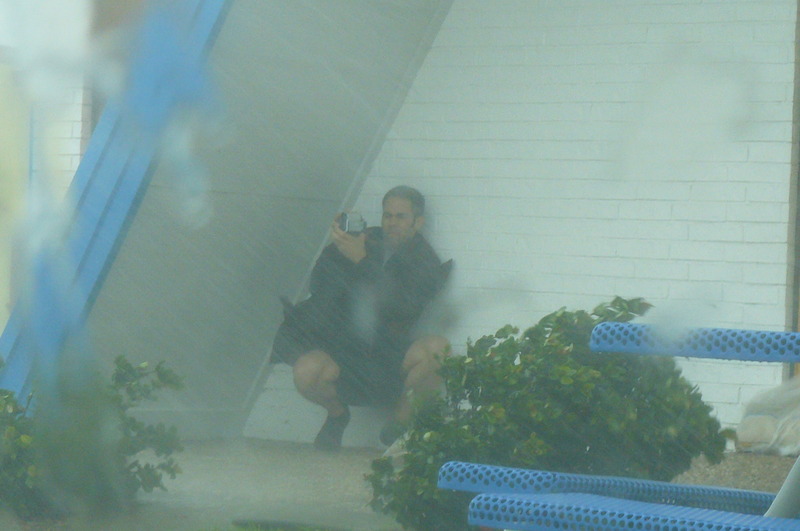 We no long had any data connection, but Michael Goss was analyzing the radar trends for us and he advised us (via mobile phone) to stay put—saying we were well-situated and would soon get raked by the inner eyewall.

We had another relative lull a little before 12 noon, and then…

The wind picked up to a howl and then to a high-pitched shriek as the rain came down in sheets. We were finally getting blasted by full hurricane conditions. We stood on the downwind side of a storefront and watched the palms and even lampposts swaying violently along the main city promenade. There was plenty of flying debris, and we stayed put during the worst of it. It would have been foolish to move around at this point.

A close-up radar shot from this time (12 noon CDT or 17Z) explains it all: Port Isabel was squarely in the powerful SW eyewall! 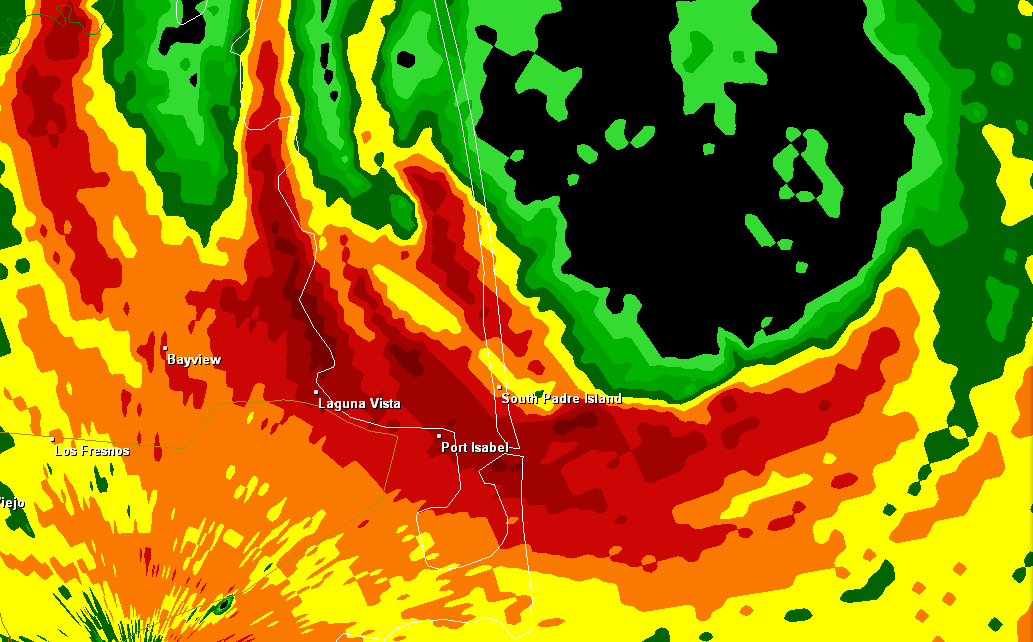 By around 1 pm or so, we noticed the winds and rain were easing a tad—not much, just a little. We didn’t know it at the time, but the cyclone was lifting to the N. The center crossed the coast a little while later, just S of Port Mansfield. 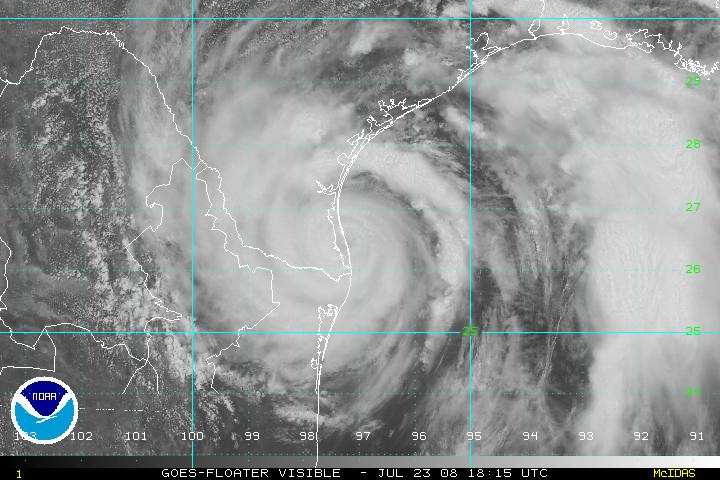 Meanwhile, down in Port Isabel, we drove around and inspected the damage. The town got hammered pretty hard, considering that Dolly was a small, Cat-1 hurricane. Most gas station canopies had been either shredded or torn down, and many buildings had lost roofing. There were big pieces of aluminum everywhere—littering the streets and wrapped around trees. We saw snapped power poles and plenty of downed trees, signs, and lampposts. However, it was nice to see that the famous Port Isabel lighthouse looked to be perfectly intact. 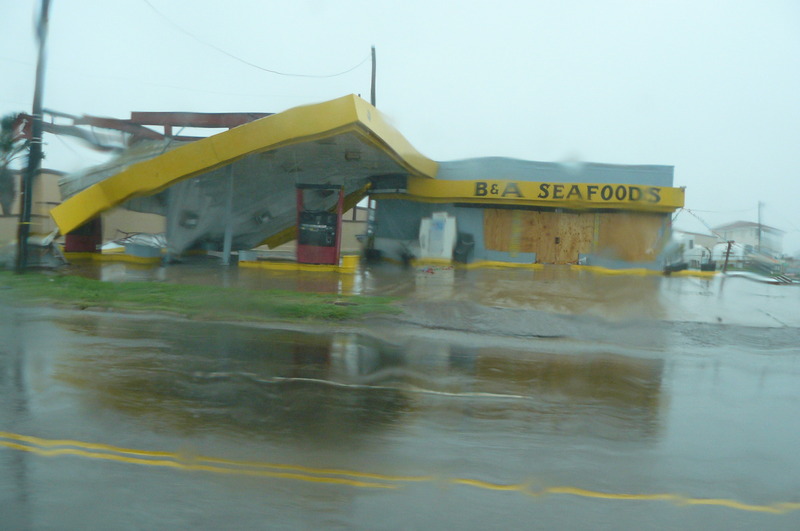 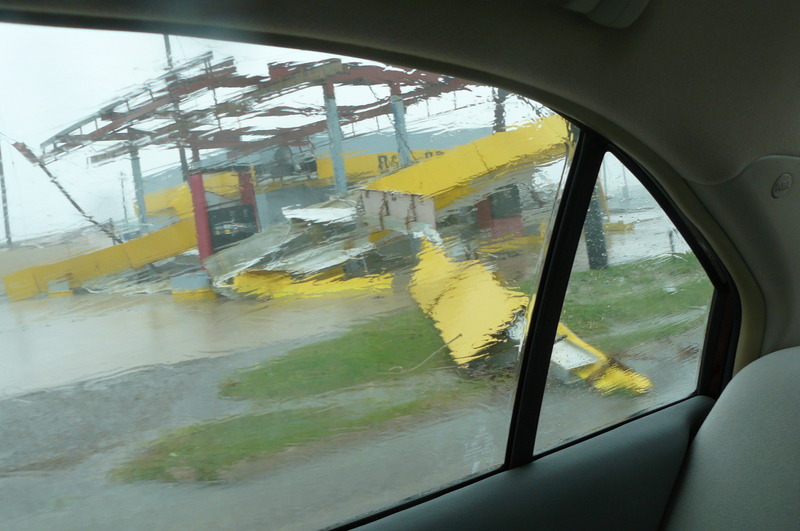 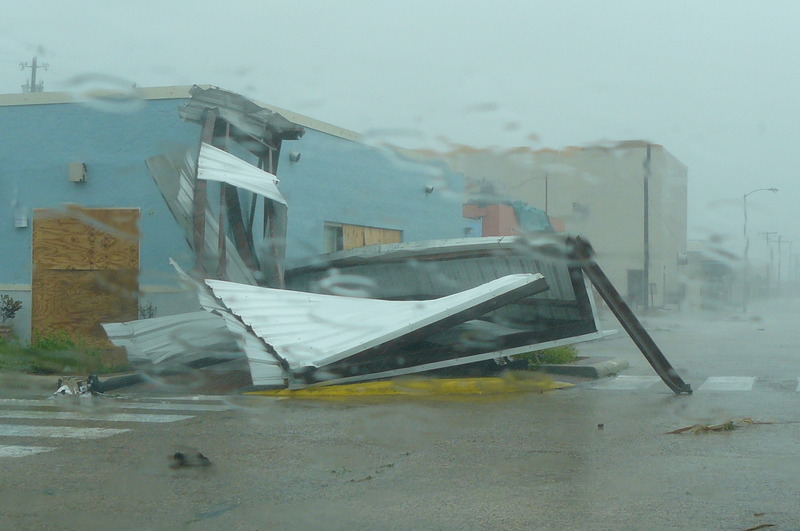 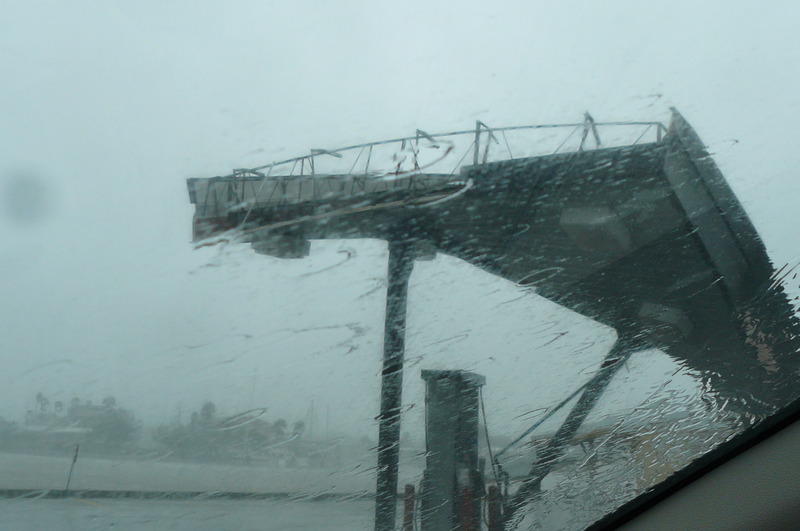 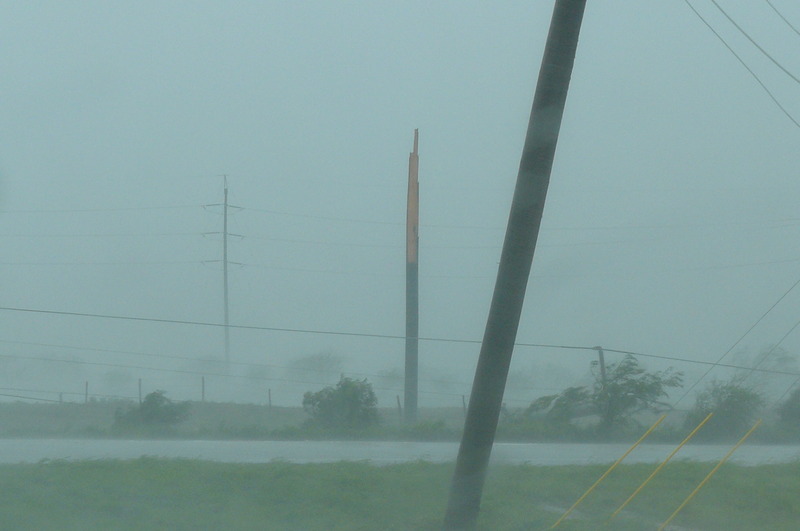 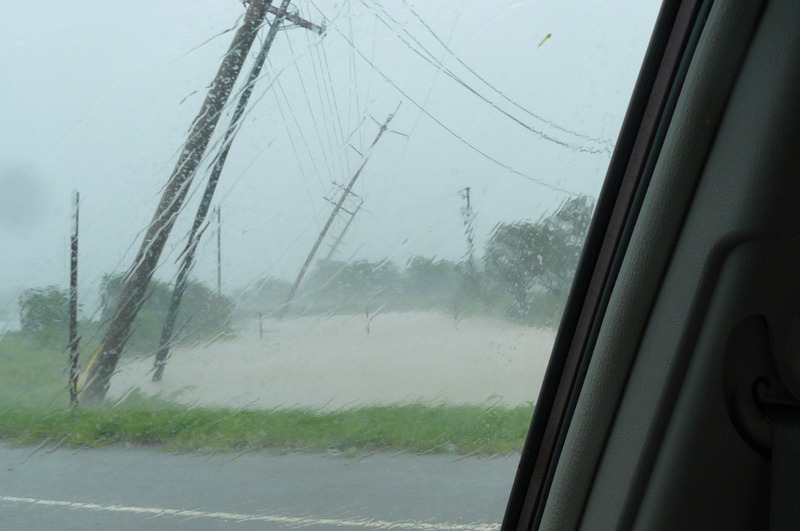 By around 2 pm, the wind died enough for us to head back up Highway 48 toward Brownsville. But the rain was heavier than ever, and the trip back was treacherous—we could scarcely see 10 yards ahead of the car.

Back in Brownsville, we found the damage to be minimal—just some downed signs and a few trees here and there. The inner core of the storm had clearly missed the city. And while much of Brownsville was flooded and blacked out, we were excited to find that our hotel had power! There’s nothing quite like electricity and a hot shower right after a chase.

Finding a hot meal was more of a challenge, but we eventually scored.  :)

Michael Goss served as our remote chase partner during Dolly—analyzing radar imagery and serving as our “eyes” when we lost our data connection and could no longer see the imagery ourselves. He did a great job steering us to the right spot!