Now You See It—Now You Don't

What made Tropical Storm Don memorable was its spectacular demise: as the system approached the South Texas coast, it literally disintegrated—not just the wind field, but even the precipitation. What came ashore near Baffin Bay barely registered on radar or meteorological instruments; the cyclone had essentially disappeared. Perhaps a better name for this one would have been "Houdini". 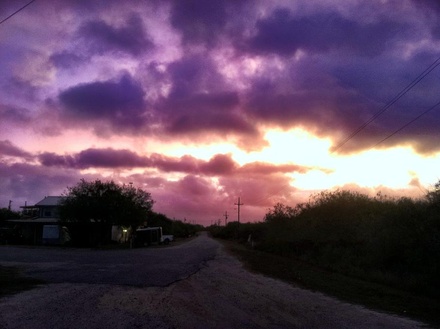 Tropical Storm Don collapsed in the most spectacular way as it approached the S-Texas coast. Observers across the weather community—in online forums, on TV, and even at the NHC—commented that they'd never seen a tropical cyclone disintegrate so suddenly.

To add to this: Cory's and my experience on the ground suggests that the system's disintegration might have been even faster and earlier than operationally believed.

Check out the chase map—which show the cyclone's advisory positions and our position in Riviera Beach, at the W side of Baffin Bay. (Cory derived our exact location using a GPS app: 27.289344ºN 97.661698ºW.) As you can see, we were perfectly situated under the operational track and optimally positioned to collect useful data. 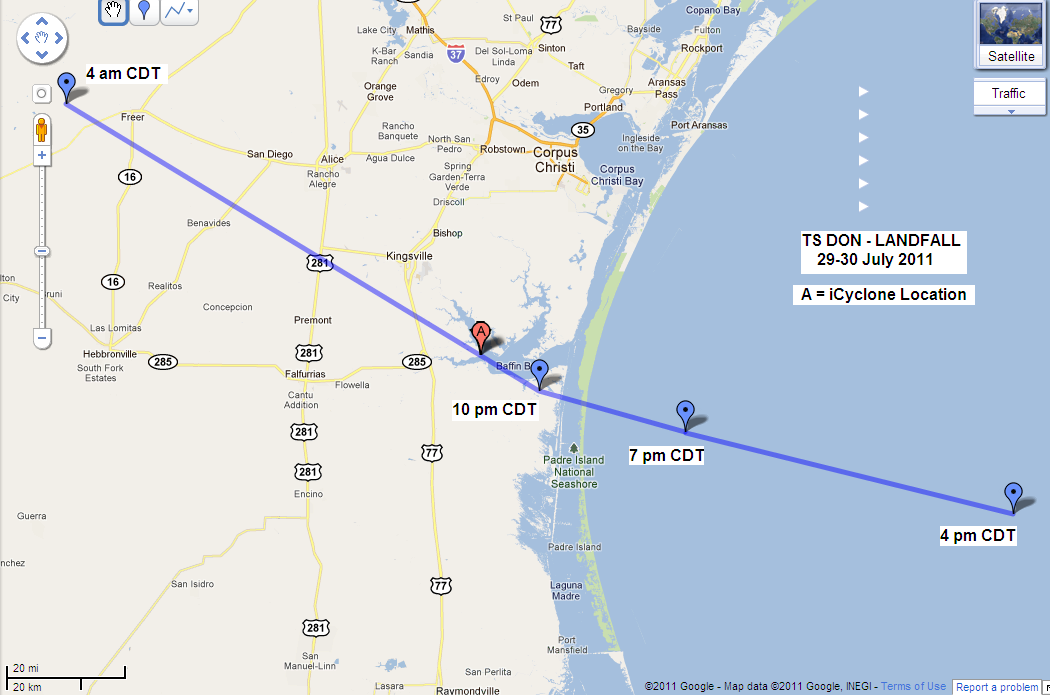 We had two Kestrels measuring the air pressure. The barogram from one of the instruments is shown below. As you can see, the pressure dropped only modestly over the few hours we were at this location—not the sort of sharp, rapid, V-shaped dip you expect as a healthy tropical cyclone's center passes over you. 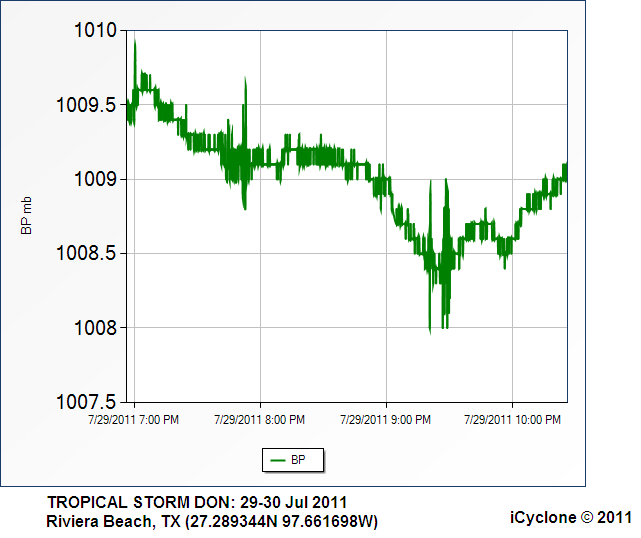 Our lowest readings on the two instruments were 1008.0 and 1008.4 mb, respectively. (We calibrated the instruments for our elevation, which was just a few feet above sea level.) Cory believes the sharp dips in the barogram below (for the first instrument) might be glitches due to our handling the instrument during those minutes. After some discussion, we decided to average the two low readings from the two instruments—therefore, when we turn our data over to the NHC, we'll recommend a low pressure reading at our location of 1008.2 mb at ~9:20 pm CDT. 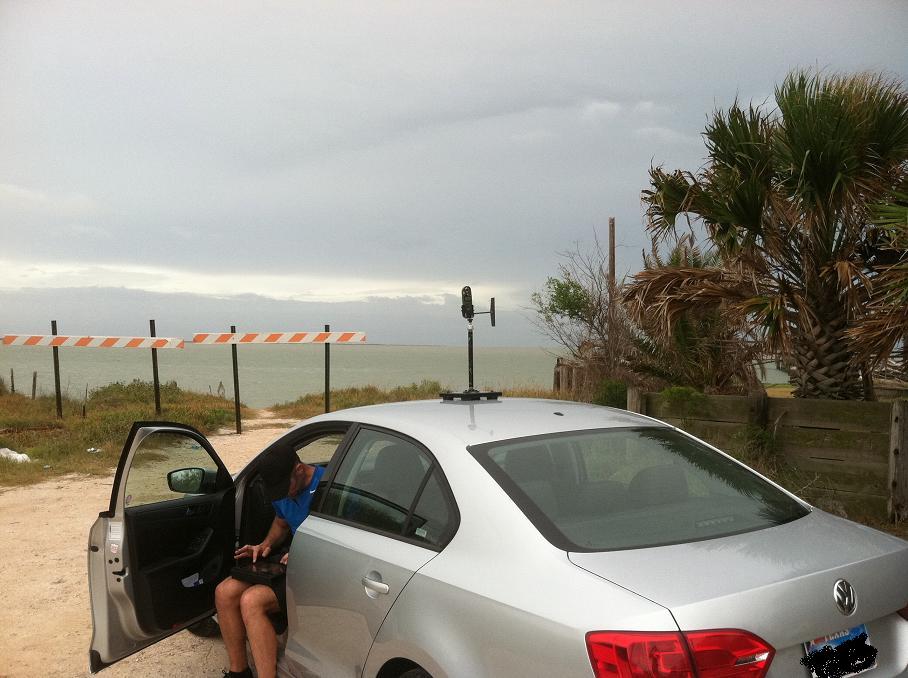 Here's the shocker: we recorded winds no higher than 10 kt! Keep in mind that 1) we were measuring at only 2 m (whereas surface winds are at 10 m), 2) we were sampling every 10 seconds (kind of low-res for wind readings), and 3) the instrument was a good 30 ft back from the open beach, where the wind felt a bit stronger. Even so, the wind data don't even justify a tropical depression. (I should note that gale-force gusts were recorded further up the coast, near Corpus Christi.)

This aside, there wasn't measurable precipitation at our location!  Even an ominous-looking "rainband" that came in off of Baffin Bay failed to produce.  It rained for a brief moment during the system's passage—but not even enough to wet the windshield. 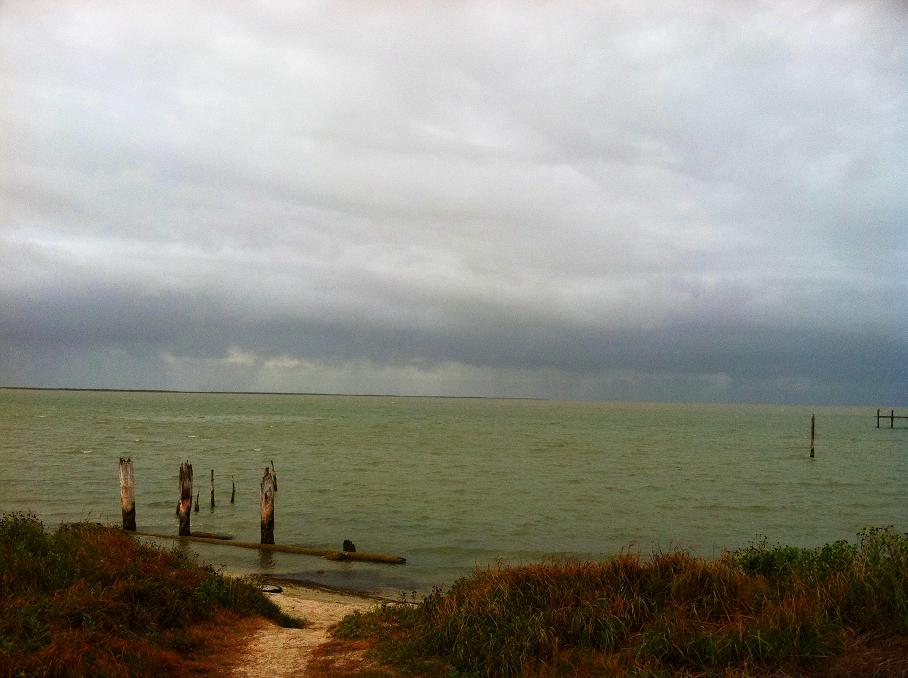 Given the above—the flat pressure trace, the lack of structural coherence, and the lack of wind—Cory and I do not feel Don came ashore as a tropical cyclone, but rather, had degenerated to an open trough before reaching the coast.

As harshly lame as this system was, Cory and I are excited that we were able to collect such useful and revealing data in a very isolated area of the coast that did not have any other recording stations (as far as we know). We didn't see a storm, but we get to contribute meaningfully to the scientific discussion—and that's cool with us. 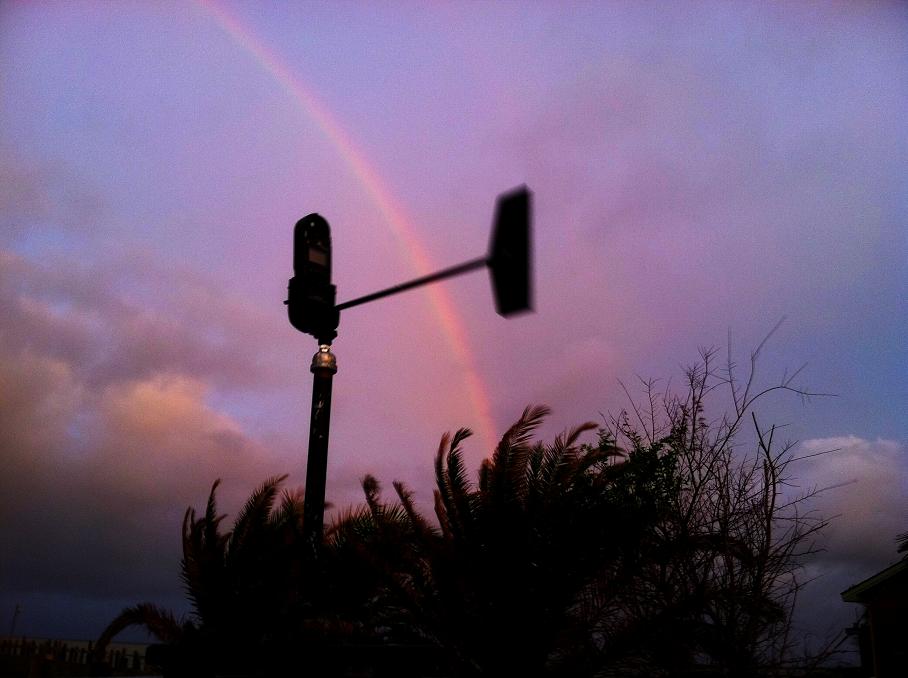 All photos on this page courtesy of Cory Van Pelt.