Talk about tough chase turf! The string of swampy bayou towns in south-central Louisiana makes one of the toughest places on the entire U.S. Gulf Coast to chase a cyclone. Low-lying terrain, lots of swamps, and no-nonsense local cops present a stiff challenge. It’s not for the faint-of-heart—but it’s perfect for iCyclone. So when Category-2 Hurricane Gustav pounded the region, we were there in St. Mary Parish to catch the action. Check it out!

After smashing Cuba as an extremely powerful Category-4 hurricane, Gustav set its sights on the USA.  But the cyclone weakened as it trekked across the Gulf of Mexico, ultimately reaching Lousiana in a weakened state.

Early morning on 01 September, Gustav was heading NW toward SE Louisiana.  Leaving from Lafayette, Scott Brownfield and I drove SE down Highway 90, toward the hurricane.  Our target was Franklin, a small town which looked to be perfectly in the cyclone's path.

When we arrived in Franklin, however, the "welcoming committee" wasn't too welcoming: a posse of no-nonsense female cops told us in no uncertain terms to get out of their town.  We didn't realize it at the time, but this apparent setback turned out to be a stroke of luck, as it forced us to relocate further SE, deeper into bayou country—and even closer to the hurricane's landfall point.

By around 9 am CDT, we were in Bayou Vista.  Moderate rainbands were sweeping through the area, occasionally rocking the car.  Scott was measuring frequent gusts between 25 and 30 kt on the Kestrel 4000.

Heading further E, we reached Berwick around 10 am and went up on the bridge that spans the Atchafalaya River.  Conditions were deteriorating and it was hard to even see Morgan City though all the rain and fog across the way.

We went back down into Berwick, and around 10:30 am or so, Michael Goss—who was remotely assisting us and analyzing radar—told us we should be very close to the eyewall. This caught us by surprise, as it seemed it had only been rainy and windy for a few hours.  The significant weather was apparently confined very close to the center—something which went against our expectations, given how we'd been constantly hearing how large the storm was.

Scott measured a gust 41 kt gust at the surface. A flag broke off, and a sign went blowing down the street.  The trees waved urgently.  Gustav's inner core was drawing near.

After approx. 20 minutes of heavy squalls that steadily increased in frequency and intensity, the eyewall moved over the town around 11:10 am CDT.  By this time, the center had already crossed the coast and was inland over the Lousiana bayous to the ESE of us. 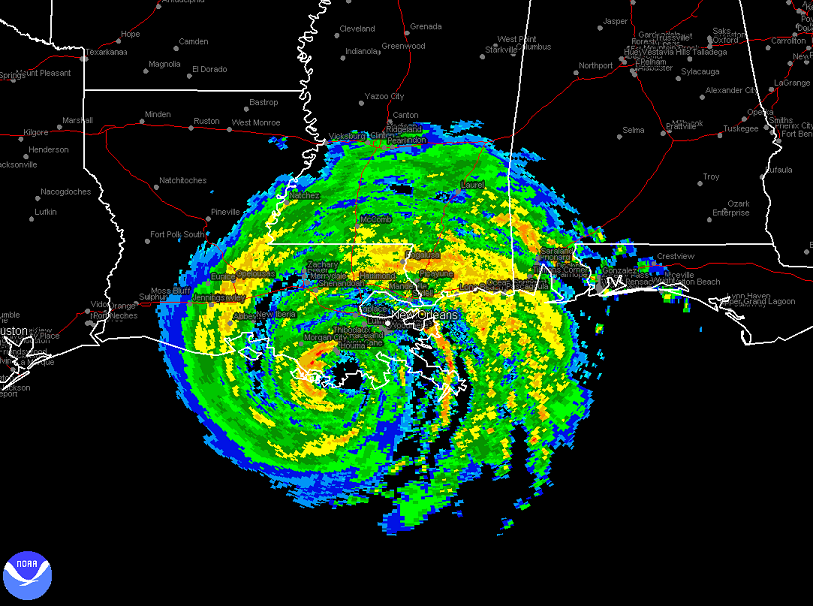 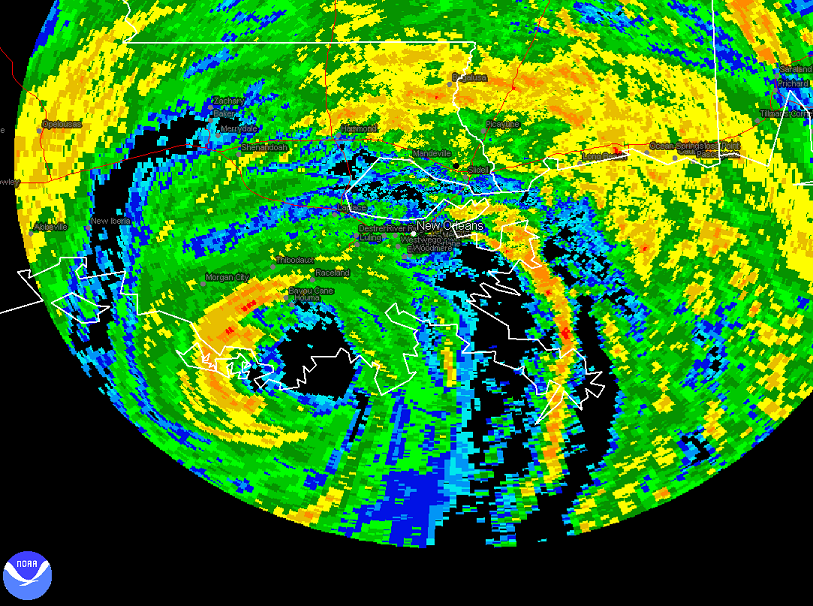 We rode it out from the front (downwind) side of a car dealership. The wind came in great bursts with very heavy rain, and there was plenty of large flying debris—including a big piece of aluminum (capable of taking someone's head off) that went crashing by the front of the dealership, as well as what looked like a very large part of a roof or gas station canopy lifting up and whisking away like a kite that broke its string. The eyewall had a streaky, up-and-down quality, and during some of the heavier streaks, it was hard to see what was happening-- one could only hear loud crashing sounds and vaguely make out flying objects through the turbulence. During this time, Scott measured a max gust of 68 kt. (Keep in mind that 1) he took readings only occasionally and most certainly didn't sample the highest winds and 2) a person is much shorter than the standard 10-m measuring height.) 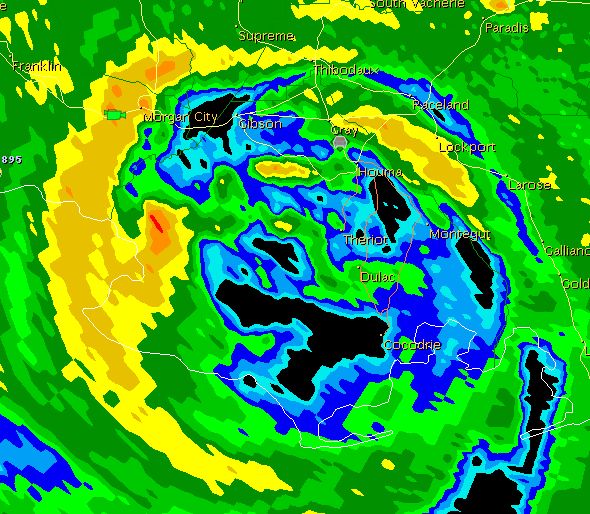 Things started to calm a little by perhaps 11:50ish—it wasn't quite as wild. 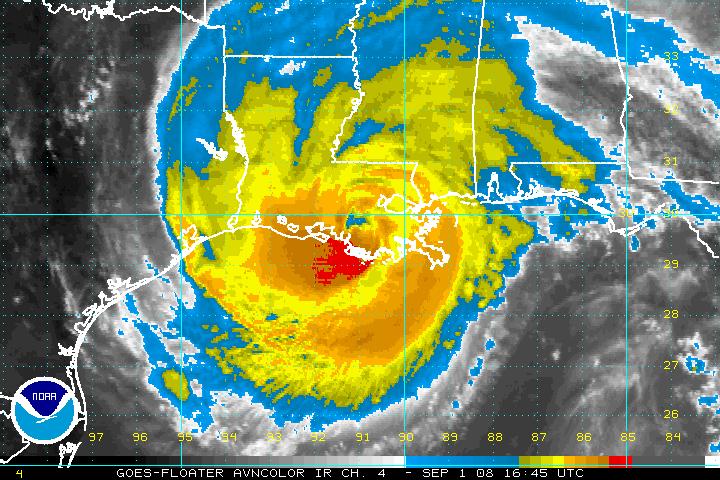 Feeling daring, we crossed the bridge into Morgan City, where we found lots of downed trees and a gas station that looked like a bomb had hit it. 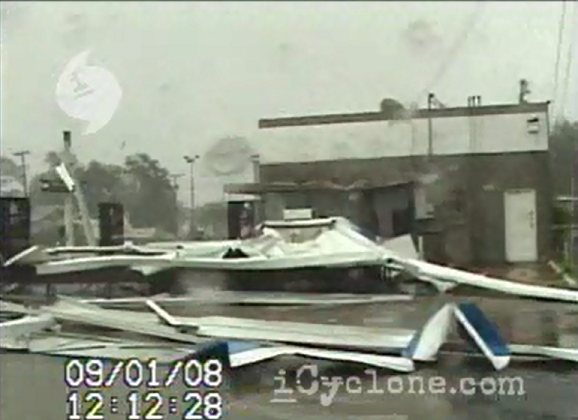 On the bright side, the city was not flooded. Conditions continued to improve as we explored downtown, so that by 12:30 pm we had a dead calm with no rain.  We walked past a large, brick church whose steeple pierced solemnly into the grey sky.  Residents stepped outside to inspect the damage or have a smoke. The Kestrel bottomed out around this time at 959 mb, then started to rise again. 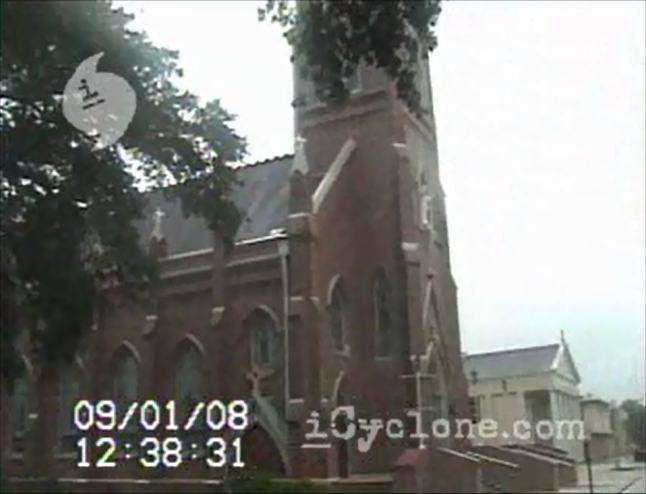 I climbed atop the levee protecting the city from the Atchafalaya River. The water was brown and smooth, and I found myself zoning out—just kind of hypnotized by the lull. 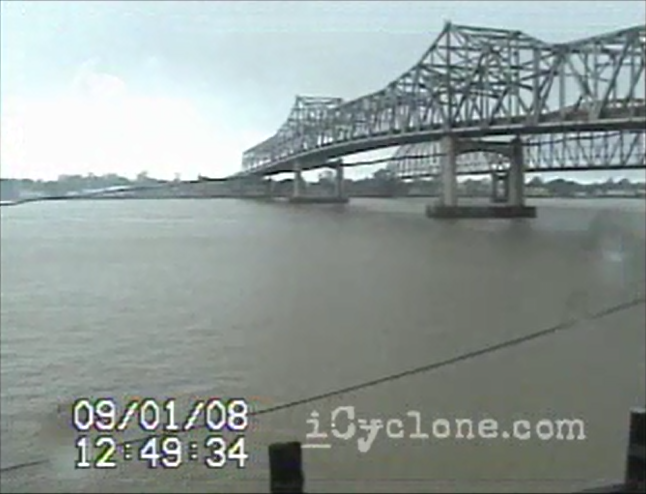 There was that odd, sinister tug of wind that interrupts a hurricane's eye and says, "Sorry—time's up. It's going to get ugly again." That tug first happened at 12:57 pm—the wind started getting gusty again—and by 1:15 pm, it seemed back up to a gale and increasing. I mostly remember lots of clanking—the clanking of aluminum and rundown buildings in an old Gulf city. The river was turbulent and whitecapped again; debris blew down the street and I saw some metal awning torn from a building; the palms swayed; but it never got too bad. Scott measured a peak gust of 42 kt-- but again, he only checked periodically and most certainly didn't sample the highest winds.

The cyclone's backside was quite dry: the wind got started well before the rain, and when the rain finally did come, it was pretty light.

(We chatted with a handful of friendly locals as the backside swept through—including a colorfully dressed guy who tried to light a cigarette while standing in the cyclone's winds, another guy with a heavy Cajun accent and white rubber boots, and an older woman who'd ridden out many of the great Louisiana hurricanes of the past—Audrey 1957, Hilda 1964, Betsy 1965, etc.)

After an hour or more of sampling Gustav's weaker backside in Morgan City, we went back over the bridge and headed back up the 90 toward Lafayette. Damage along the 60-mi stretch was mostly light, and we didn't see any serious storm-surge flooding near the freeway. 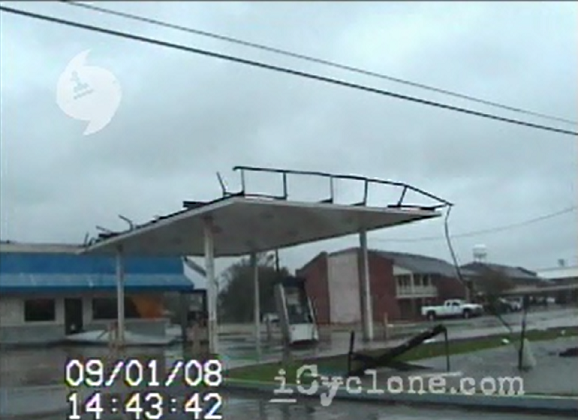 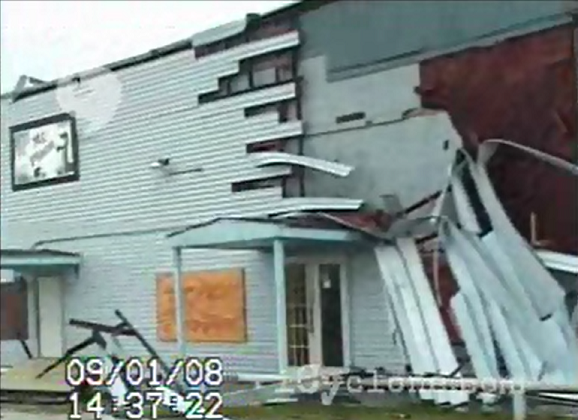 We arrived back in a grey, rainy Lafayette late in the afternoon. The worst of the cyclone had passed, and our overall impression was that the damage around the city was light to moderate. However, electricity was out and there was nothing to eat.  I'd been subsisting for at least 24 hours on snack bars and chips, and I realized that there was only one way to remove myself from that misery: sleep. (Scott had already conked out. )

Our overall feeling about the day: the cyclone's intensity was a tad disappointing, but the chase was worthwhile and successful from a strategy-and-planning perspective. Interestingly, what seemed like bad luck—getting kicked out of Franklin—turned out to be great luck, as it caused us to search for better positions deeper in the bayou country. The end result is that we're sure we saw much stronger winds down in Berwick than what we would have seen up in Franklin. 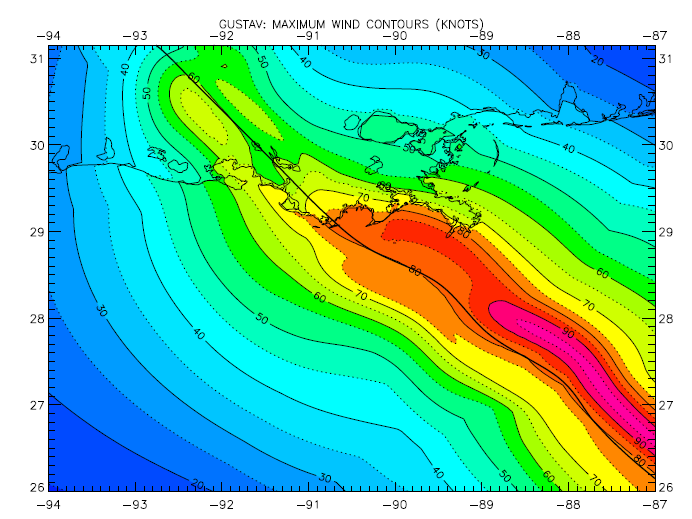 Thanks to the many members of the Eastern US Wx forum for the inputs, data, and radar images. And thanks, Michael Goss, for being such a great Remote Chase Assistant. Your help (especially with radar interpretation) makes a huge difference.