Sometimes a hurricane knocks you off your feet and shows you who’s boss. Like Odile. I chased this one not expecting much—hurricanes on Mexico’s Baja California Peninsula usually aren’t too bad. But this one made its own rules. By far the most violent hurricane in the history of Cabo San Lucas, Odile smashed the city with devastating, unexpected ferocity. I got the message loud and clear when I found myself diving under a desk, my legs bleeding, terror in my heart, as our hotel lobby exploded around us.

I didn’t realize this when I went to chase it—did not realize Odile would be an historic storm and a major disaster for Los Cabos. 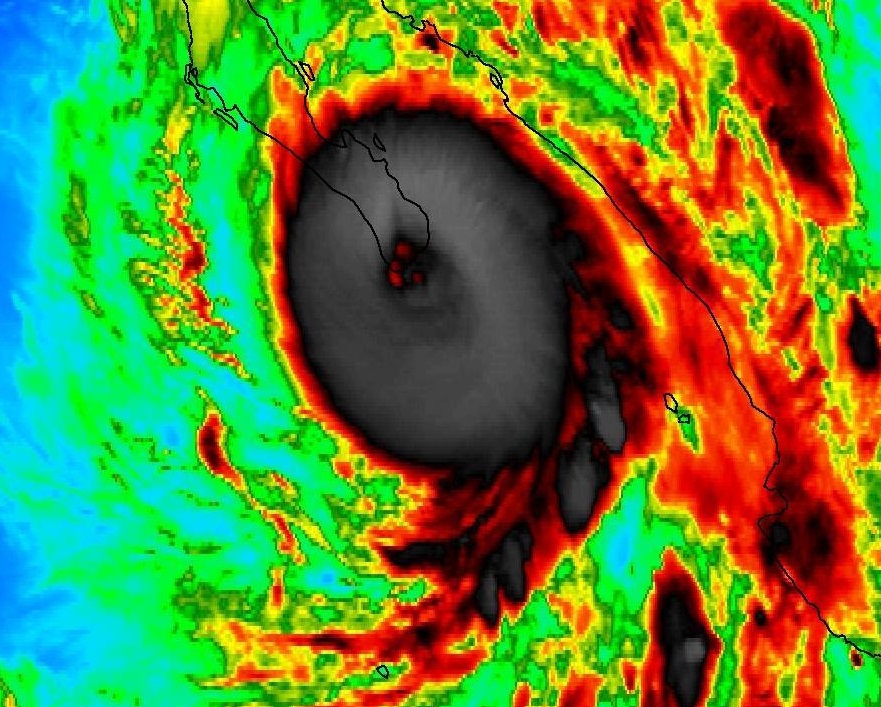 Powerful hurricanes form off Mexico’s Pacific coast all the time, but they usually stay out to sea before October. The ones that make it up to the Baja California Peninsula are usually unraveling by the time they get that far N—loose Cat 2s that have little of their original bite.

I chase on the Peninsula not because the cyclone specimens there are so amazing, but because I’m Southern Californian and very close by. It’s easy for me to get down to Los Cabos to chase. 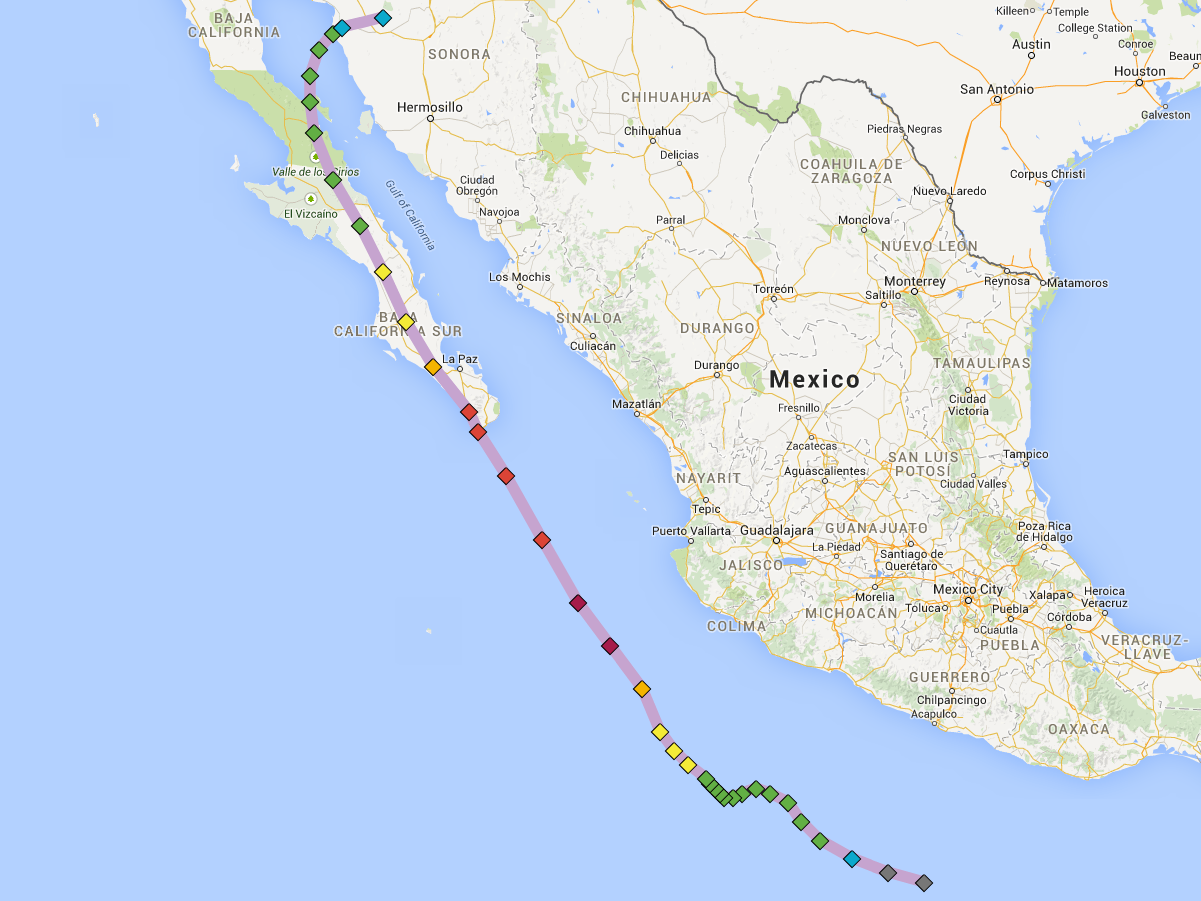 When Tropical Storm Odile formed 200 mi SW of Acapulco on 10 September, I hardly noticed it. 2014 had been a busy season, with most of the storms staying offshore—and the computer models seemed pretty confident Odile would stay offshore, too. The Euro (ECMWF) said so—run after run. 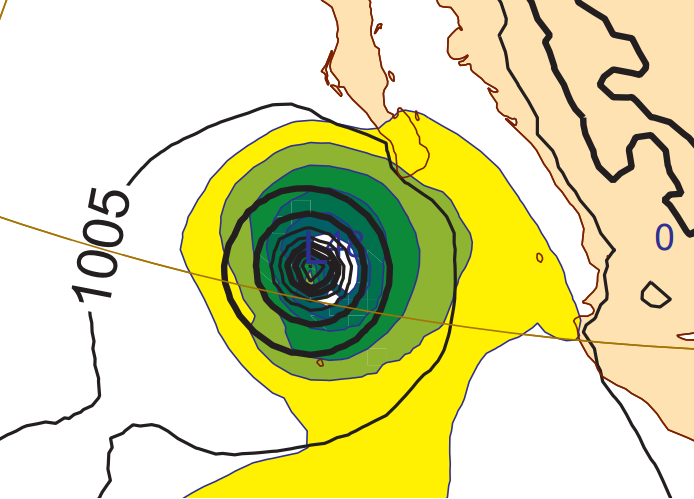 Odile became a hurricane a few days later, and I’ll admit it caught my attention when it rapidly intensified to a Category 4 (winds of 120 kt) and started accelerating NNW. 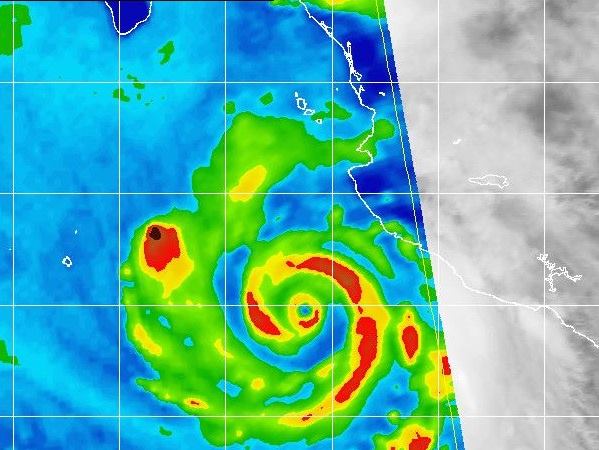 The National Hurricane Center’s forecast tracks had kept Odile’s core well offshore—but the Euro started to show a disturbing trend E, with the 12Z run on the 13th bringing the cyclone’s core perilously close to the Baja California Peninsula. 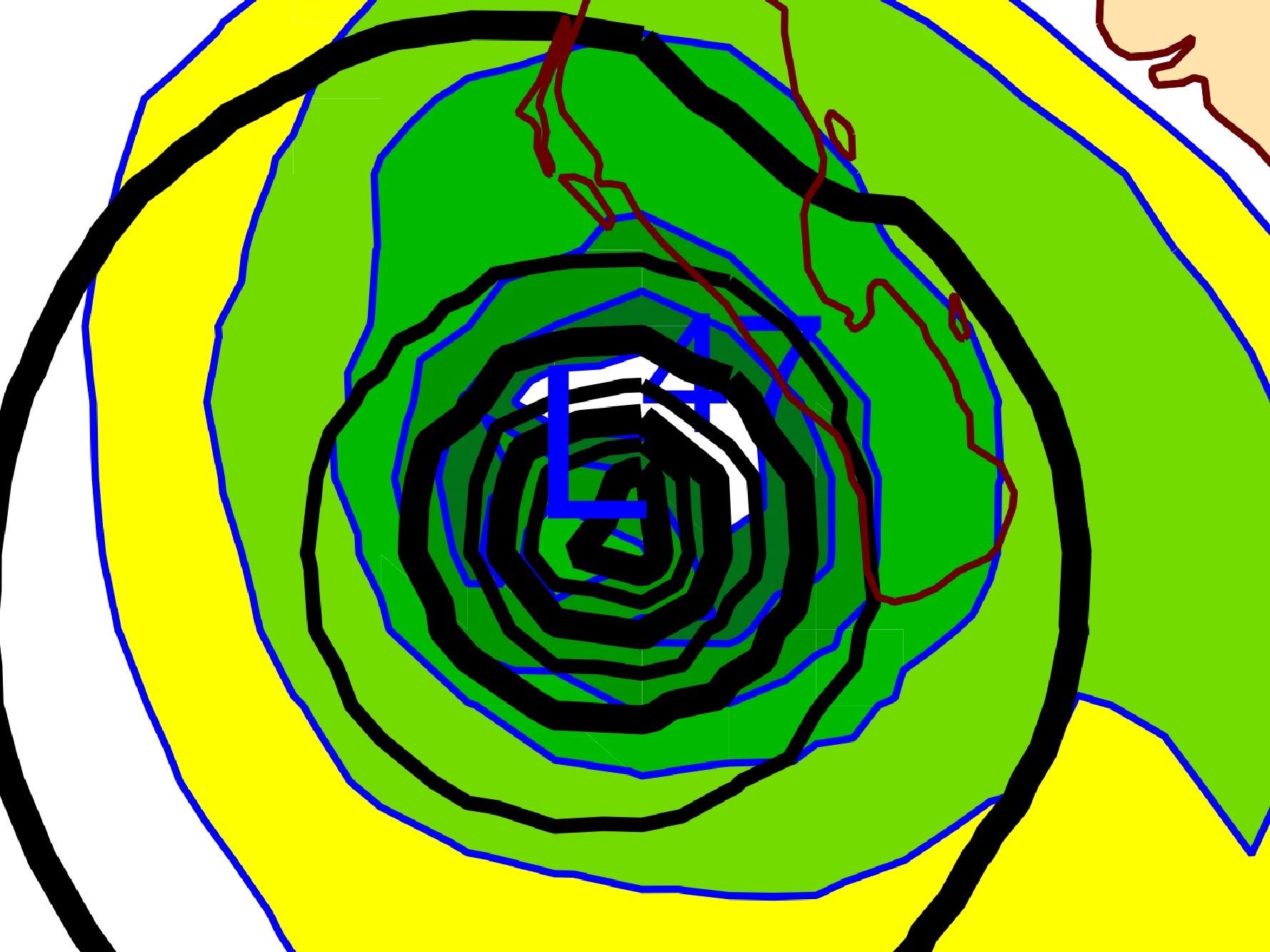 And as Hurricane Odile trended right of expectations, the NHC’s forecast tracks shifted closer to the coast, too. By the 14 September, the Peninsula was under a Hurricane Warning.

And at this point, I had to decide if I was chasing Odile. Time was running out.

Pulling the trigger to go chasing is never easy. There’s a lot at stake: time, money, and my reputation. And so I often get a little crazy leading up to the decision—obsessively going back-and-forth between yes and no.

Hurricane Odile was giving me mixed signals. It looked kind of interesting, but two thing were killing my buzz.

For one thing, the models—but the Euro and GFS still agreed that Odile’s center was going to miss Los Cabos to the W. And I find it’s generally not good to bet against a scenario that the Euro and FGS agree on.

But the other buzzkill was the regional climatology. As I’ve mentioned, the Baja California Peninsula rarely—and I mean rarely—gets a major hurricane. They get lots of action—a lot of hurricanes passing near and over the Peninsula all the time—but almost always unraveling, N-moving junk storms no stronger than Category 1 or 2 (yellow and orange). There have been only two Category-3 impacts on the Peninsula since reliable records started in the 1940s (red). Odile was already weakening, and I sensed it was going to be just more of the same—even if it did hit. 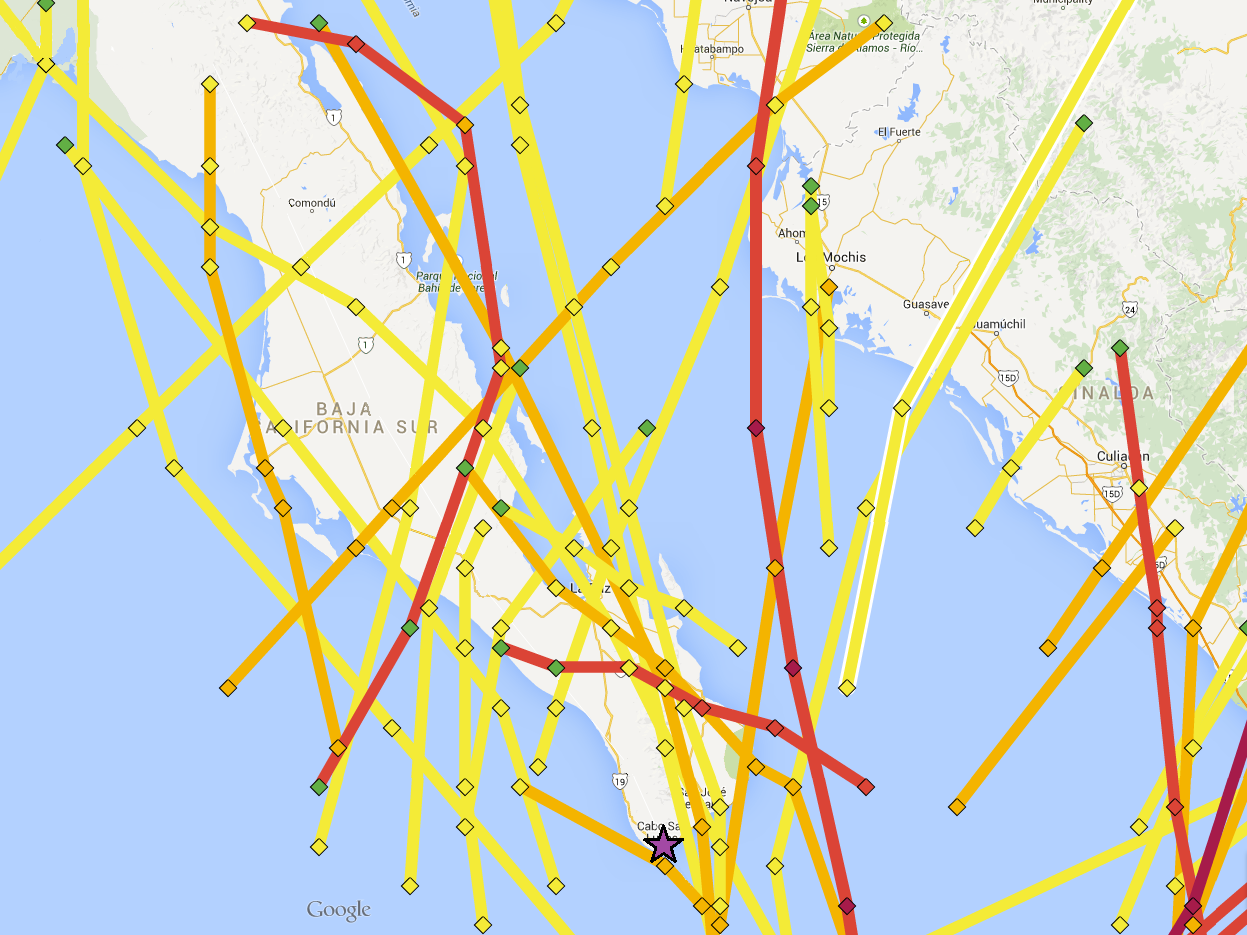 Despite my doubts... I went for it. Two reasons:

So my cameraman, Steve Crighton, and I rushed to the airport (LAX) and hopped on the very last flight to San Jose del Cabo. A bust seemed likely, but I didn’t want to risk it. Better to go and bust than stay home and miss something big.

Little did we know how big this was going to be.

Flying into Los Cabos International Airport (SJD), we could see a grey sky hanging over the Peninsula and rough surf already pounding the shoreline. 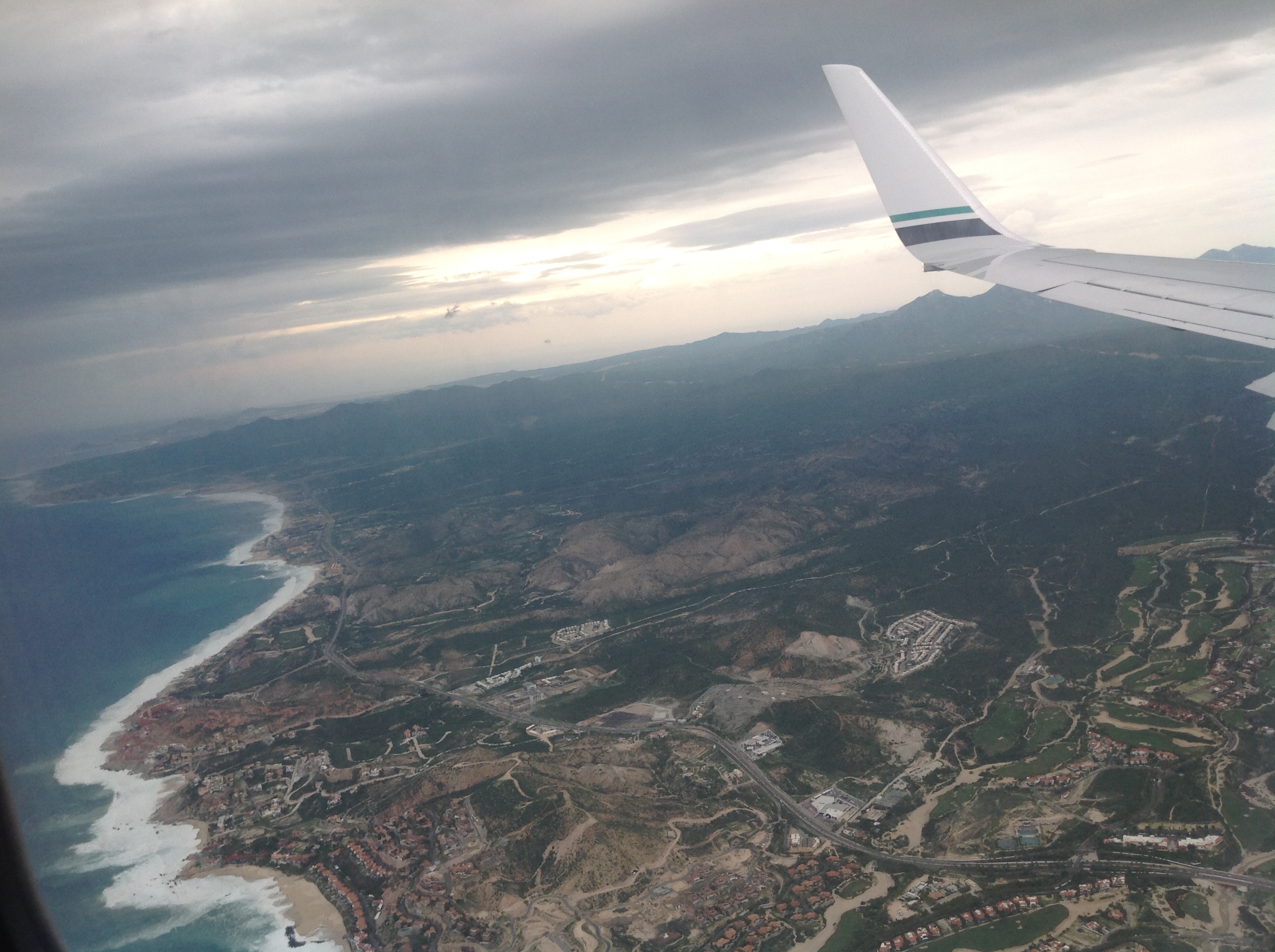 The landing was rough, and we were the very last flight in. The airport was closed down just after we arrived. (Yeah, we cut it way too close.) A heavy rainband with gusty winds passed through just as we exited the front entrance to get our rental car.

When we checked into the hotel, the friendly folks at the front desk didn’t seem at all concerned about the approaching hurricane. No preparations were being made, and they just kind of smiled when we asked if they were worried.

But I couldn’t blame them. Cabo San Lucas hadn’t gotten a bad hurricane in over 70 years. The big ones always seemed to miss the city or weaken before getting there. “Hurricane” in Los Cabos had come to mean “crummy weather” or “not a beach day.” No big deal.

I noticed the hotel’s lobby was a big, open space with lots of glass: big glass windows overlooking the Pacific and a big glass entrance. In just a few hours, violent winds would blow this lobby apart and we’d all be cowering like rats.

But of course we had no idea.

I went up to my room and admired the big, open view of the ocean—a perfect front-row seat to greet an incoming hurricane. 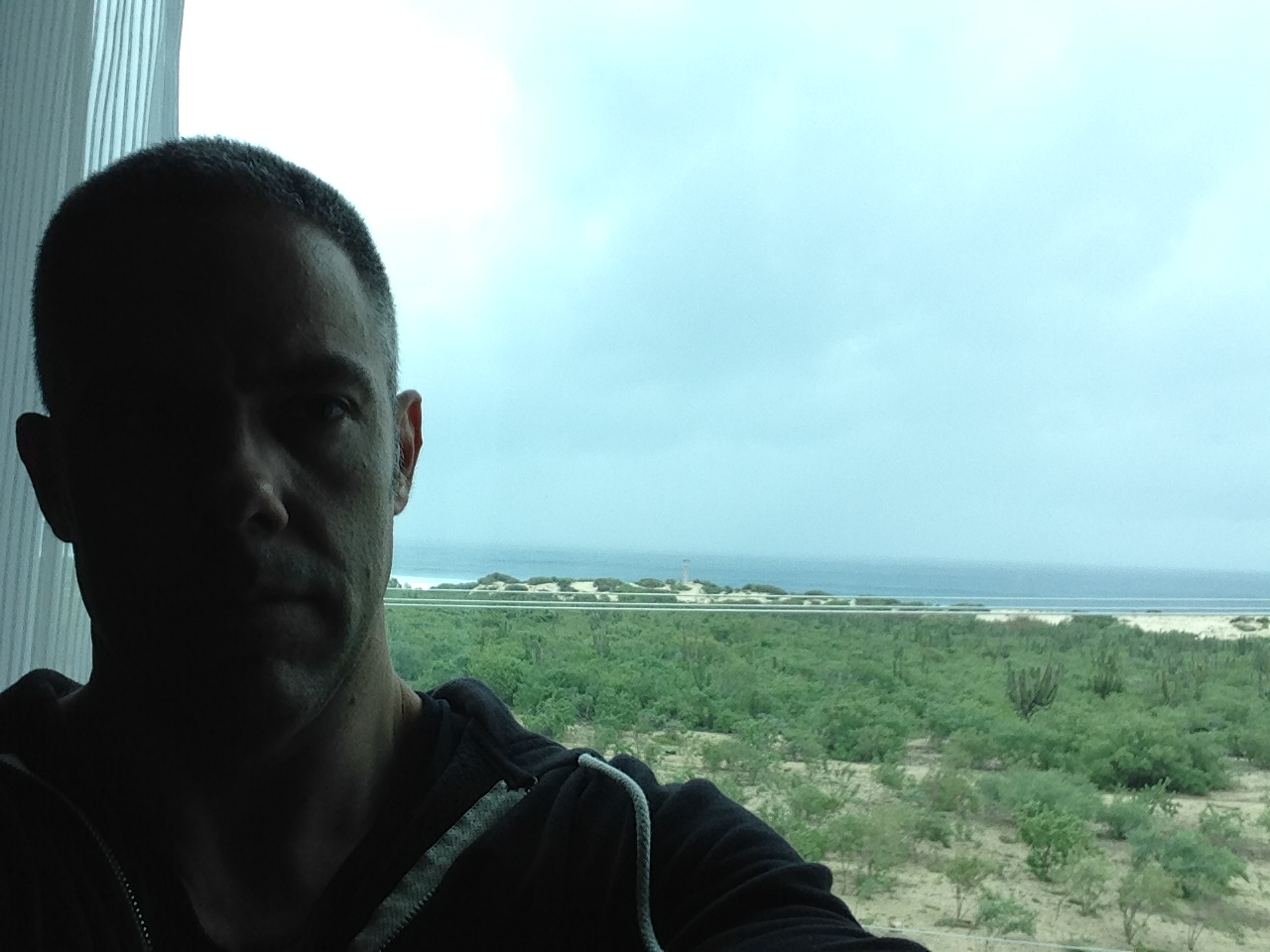 Hurricane Odile was speeding NNW, rapidly closing in on us. The satellite images looked pretty threatening. But for some reason, I still felt strangely skeptical of the storm—felt it wouldn’t be a big deal. Just another Baja California hurricane. 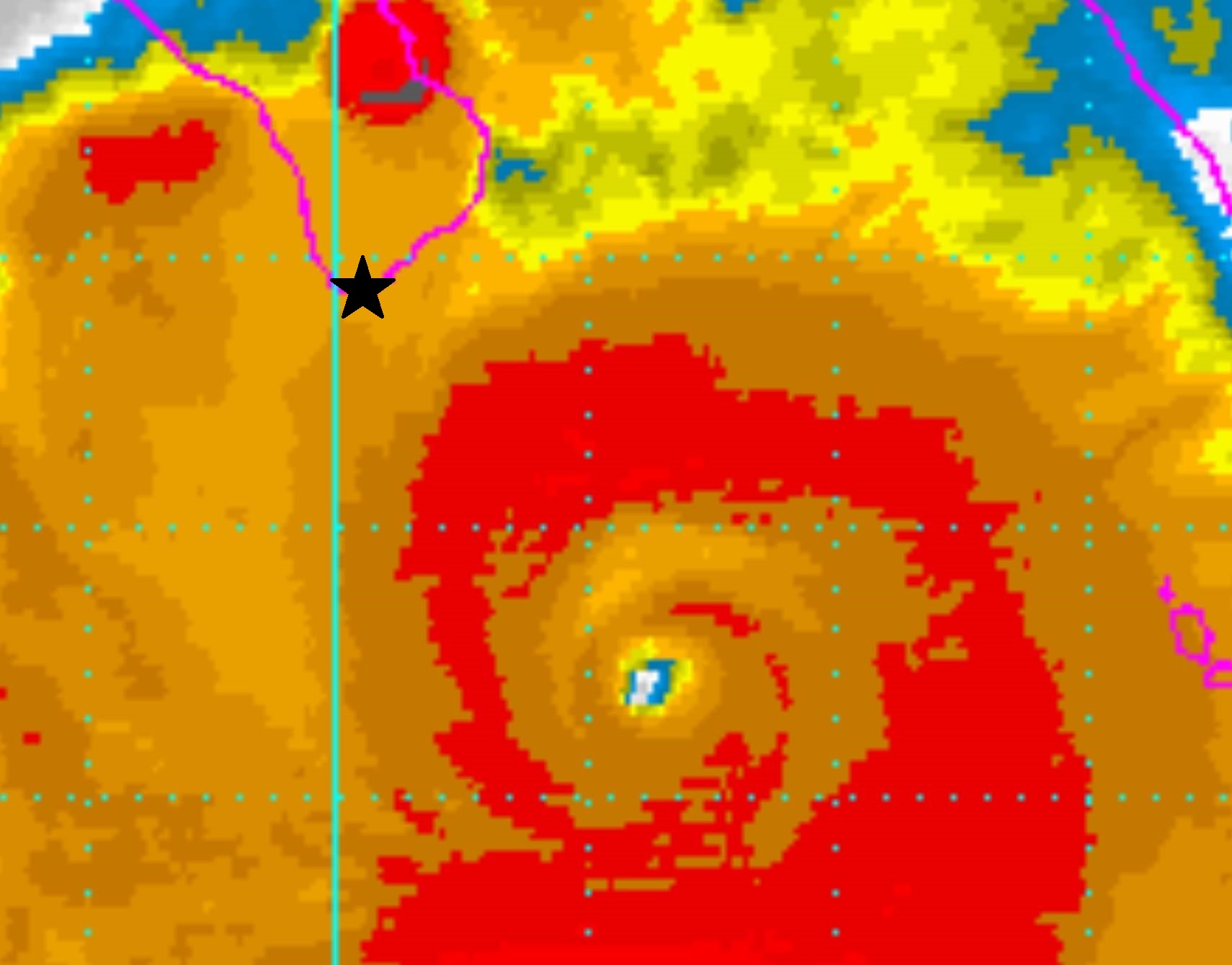 By early evening, it was rainy and very windy. Hurricane Odile was charging relentlessly NNW at a brisk 15 kt toward Los Cabos. A direct impact was now imminent. 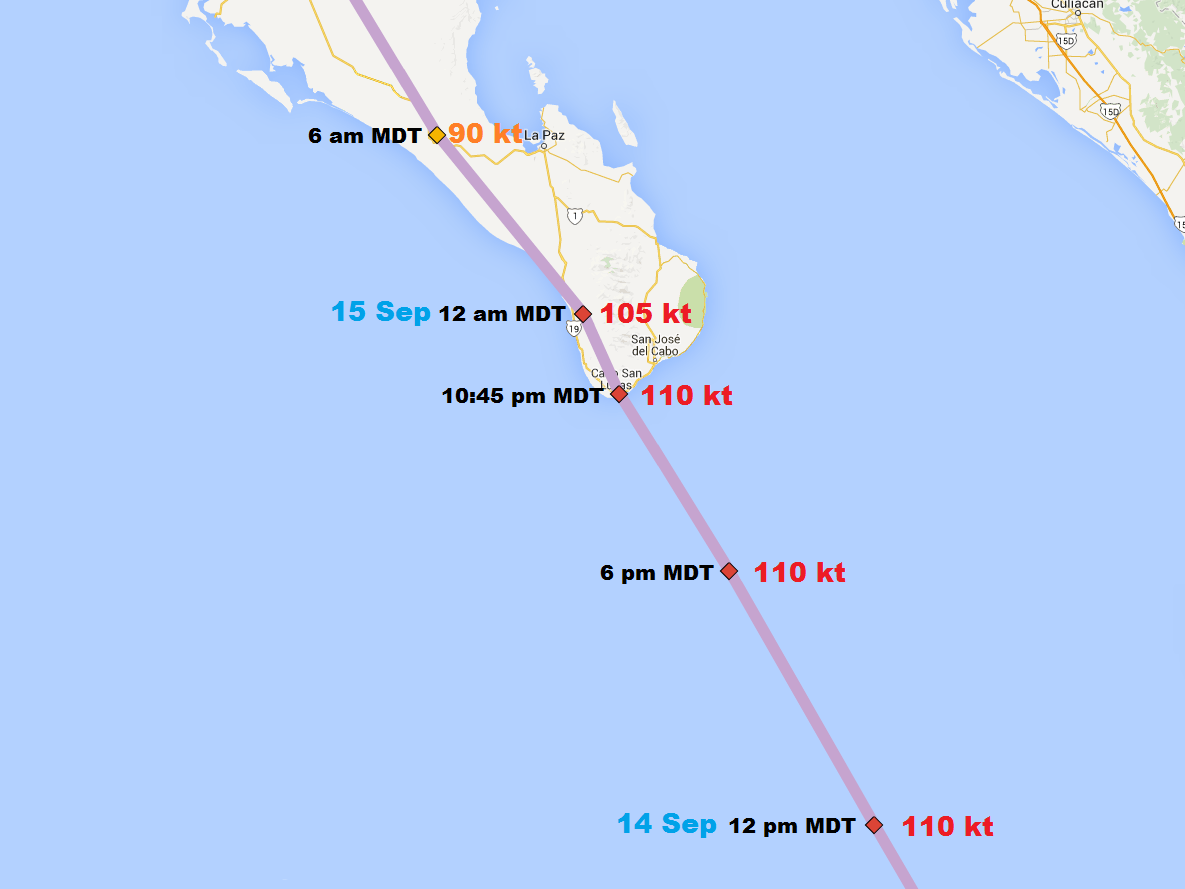 Steve and I decided to take a quick drive around town—to get a last look at things before nighttime. It was stormy, but nothing too bad—yet.

Satellite loops showed the hurricane’s eye was wobbling quite a bit, but the smoothed-out motion was right toward us. And the intense inner core was getting very close. 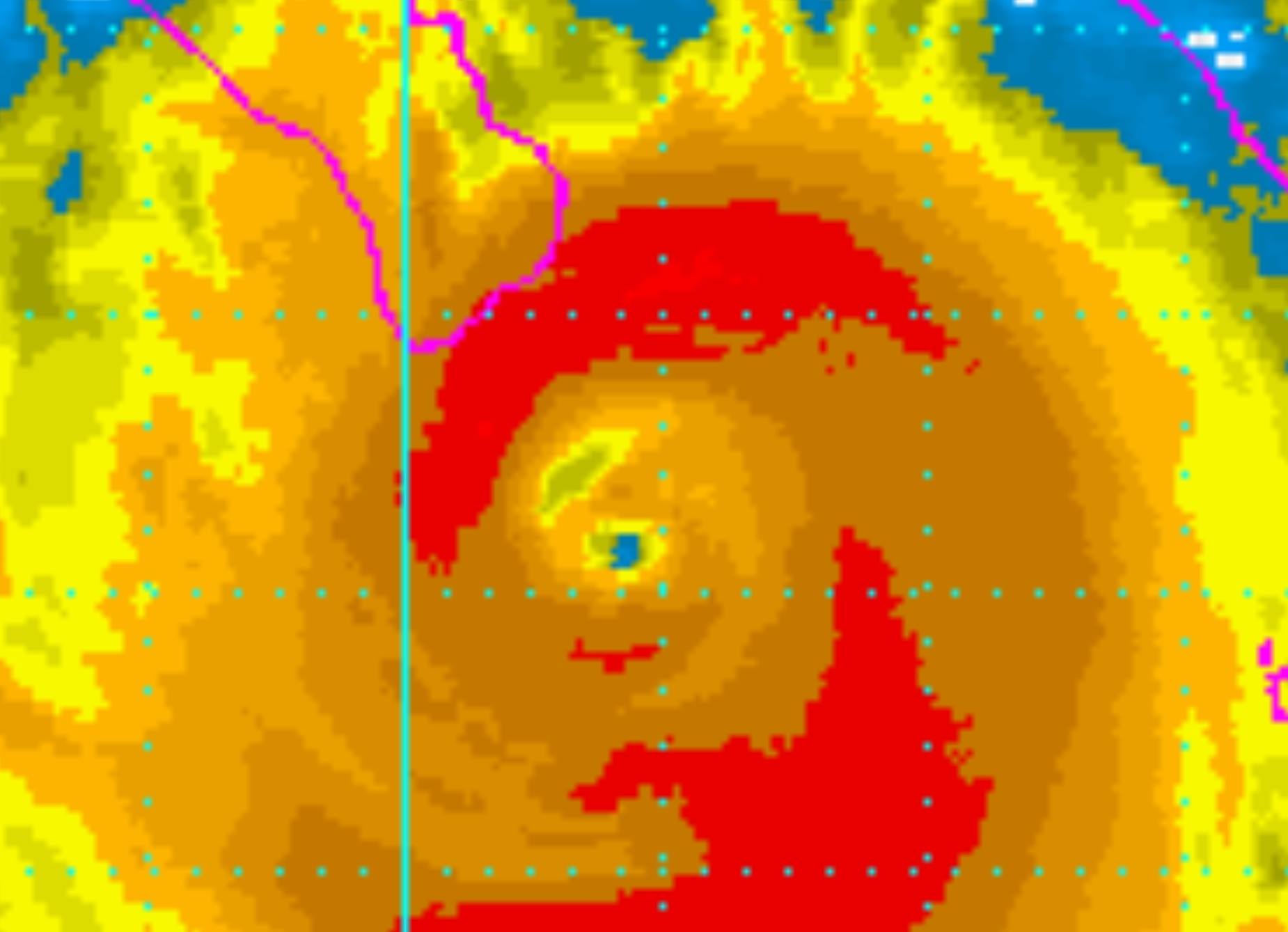 And so as darkness fell, we returned to the hotel to ride out the storm. (This ended up being a good call, as the exact center of the hurricane would make landfall within just a mile of us—an almost perfect, bull’s-eye hit.)

We parked the car just before 8 pm. As we hurried into the hotel, I noticed the wind was starting to get that angry tug. The trees around the parking lot were swaying wildly. When we got inside, a high-pitched whistling echoed through the lobby. The front doors pulsed.

The hotel staff put a sofa against the doors to barricade them, but it didn’t help much—they kept pushing in.

By 8:45 pm, the whistling of the wind suddenly graduated to a full-on roar. The front doors shook badly.

Within a half hour, screaming, roaring winds were hammering at the entrance of the building. The front doors pushed out of their frames, letting wind and rain into the lobby. We closed them as best we could and piled more furniture against them. But it was a losing battle.

By 9:30 pm, we were fully inside Hurricane Odile’s violent core. 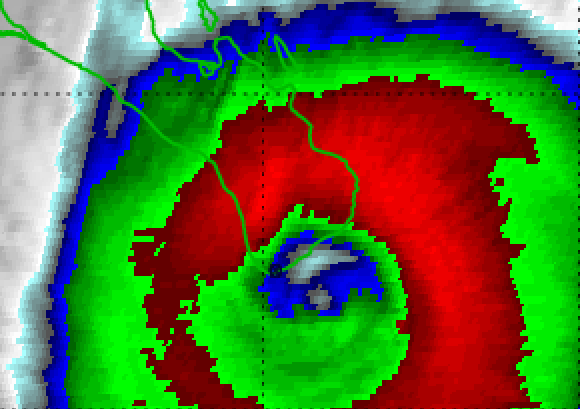 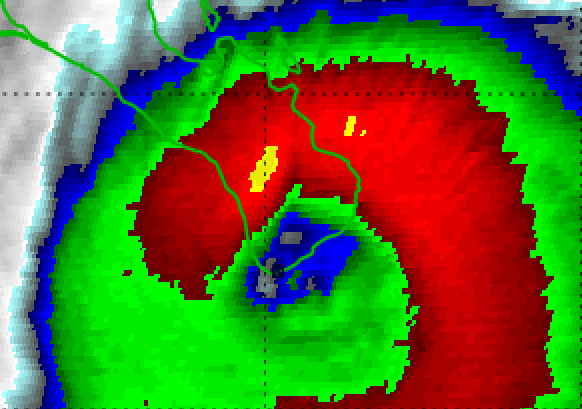 High-energy blasts of wind pounded the hotel. Some of the guests—who’d previously been playing cards and laughing over drinks—now looked a little freaked out.

At 10 pm, the front entrance of the hotel completely blew in—doors, frame, and all—and that was that. We gave up. The entrance was destroyed and we surrendered the lobby to Odile. All we could now was make sure not to get too close—because outside it was wild. 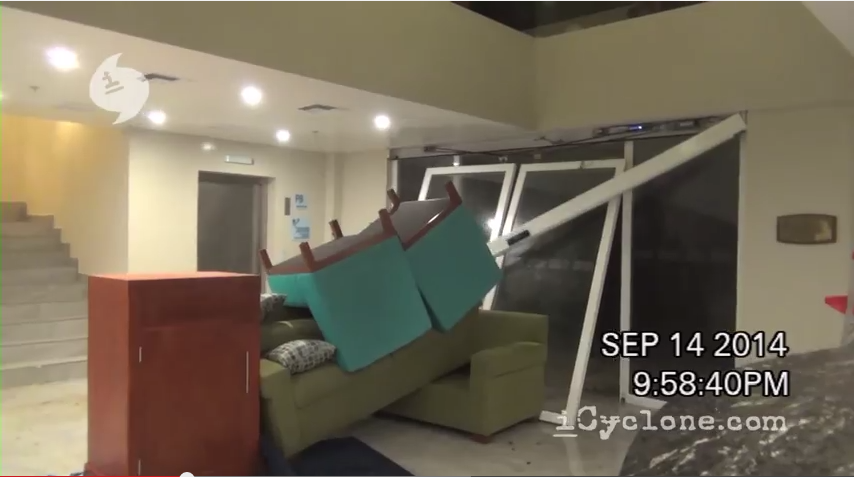 Through the smashed doorway, I could see debris—big pieces of the hotel—flying by in the darkness. The hurricane sounded like a train going by—with a whistling on top of that. But I could hear other sounds, too—car alarms going off… then a tremendous crash as a large window on the second-floor balcony exploded and glass came raining down.

My ears were popping. The interior walls of the hotel vibrated from the energy.

Odile was the real thing—a very serious hurricane. I’d underestimated this one.

A little after 10:30 pm, the roaring ceased and it started to calm. Finally.

We were in the eye of mighty Hurricane Odile. 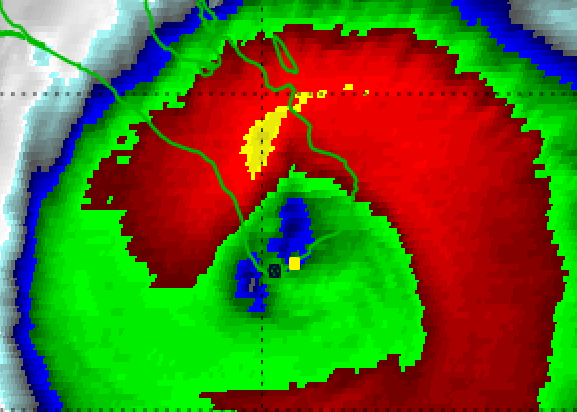 In fact, we were almost at the dead center. The National Hurricane Center’s postanalysis shows the landfall happened at 10:45 pm almost right at our location (yellow star) on Bahia San Lucas, near the Cabo San Lucas city center. 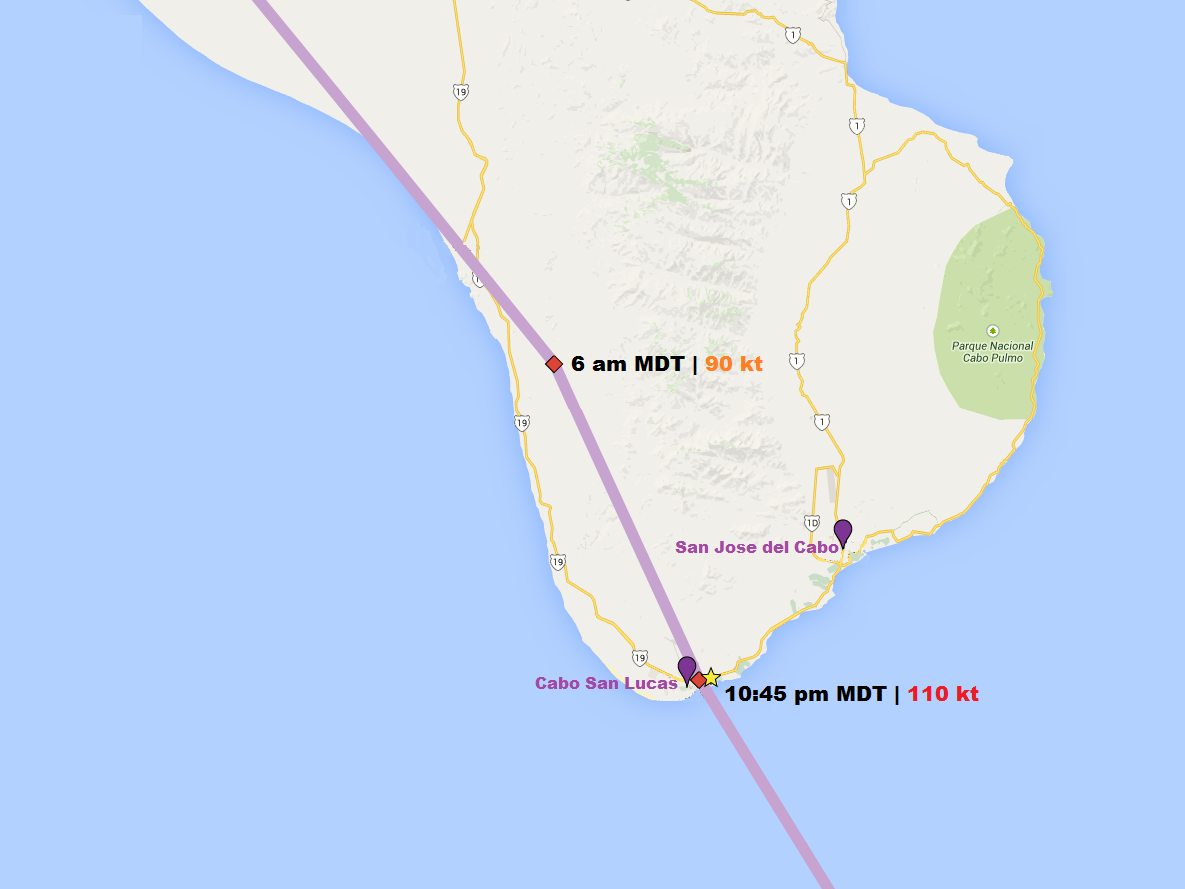 I crept through the smashed entrance of the hotel and out into the parking lot.

I was astonished at the mess—it was even worse than I expected. The front of the hotel had been beaten and battered, with broken windows and pieces of facade ripped off. The pillars of the front portico had been chiseled down to their metal frames—like a swarm of piranhas had attacked it. Large debris littered the parking lot.

The rain stopped pretty much, but I don’t remember a dead calm at any point. It seemed to stay breezy, with winds of 15 or 20 kt during most of the lull. 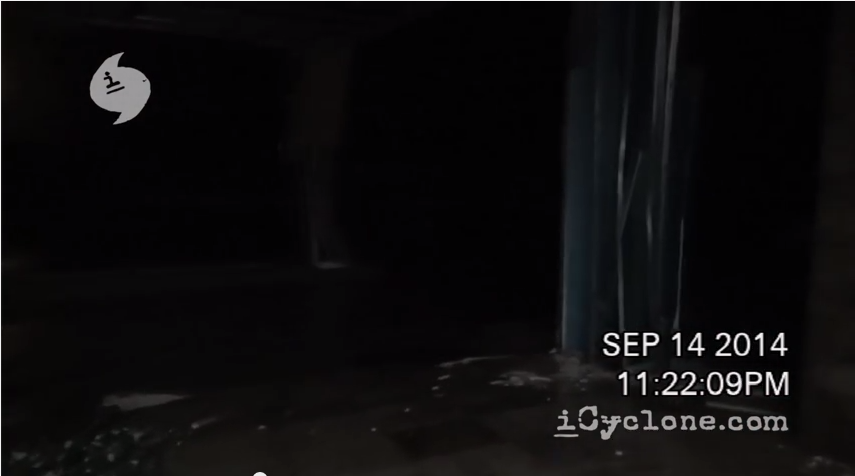 Of course the calm couldn’t last forever. At about 11:25 pm, I heard hissing sounds and a sort of low growl. That’s the only way I can describe it. A piece of tin blew across the parking lot. The wind was picking up again—going the other way.

My Kestrel read 952 mb. The pressure was rising—fast. The hurricane’s center was moving away and we were going back into that dreaded eyewall.

Despite this, I assumed we’d been through the worst of Odile—that the cyclone’s backside wouldn’t be as bad as the front had been.

I was flat wrong. Boy, was I wrong.