When Given a Lemon, Make Lemonade

This chase was a big bust. I flew to the Yucatan Peninsula for a major hurricane—but Rina rapidly unraveled and came ashore as a tropical storm. Still, it was a fun little chase, and a successful one in its own way: I perfectly nailed the center at landfall, and I collected data which helped the National Hurricane Center with their postanalysis of the system. In the end, I made the most of a disappointing situation. 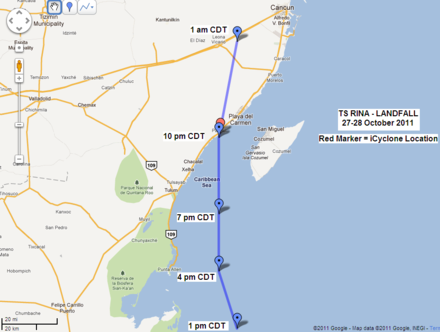 Of course, Rina wasn't worth traveling from California to experience—obviously not—but, hey, I was there and I made the most of it. Rina sucked but the chase was a success. I wanted to punch the center and that's what I did. I got right in it—a bullseye—and collected valuable and relevant data. (Yeah, I'm patting myself on the back—I've got to do something after coming from California to chase a sheared tropical storm!)

It was cool to really observe/document the component parts of a tropical cyclone as it passed right over my location. And unlike Don, Rina actually did still have an intact structure and observable tropical-cyclone components: a sharp pressure dip, a tight wind core (with front side and backside), a central calm bookended by periods of rain/wind, and a sharp directional shift in the wind after the center passed and the pressure started rising. (We had none of these things in Don.) Rina was weakened and hurting, but the "bones" were still in place. There was still structure. And the frequent lightning was a small bonus.

I shot no video of Rina. I have no desire to dilute my portfolio with tropical-storm footage—seems kind of lackluster—so I didn't even turn on the camera. You know what, though? It was kind of cool and liberating to not have to shoot video, and it allowed me to concentrate more on observations. So it was a different kind of chase.

From a weather-nerd/data-collection standpoint, this chase was awesome.

Quick summary of the chase's particulars. (All times are CDT and rounded to nearest 5 mins unless it's the time of actual, recorded data.) 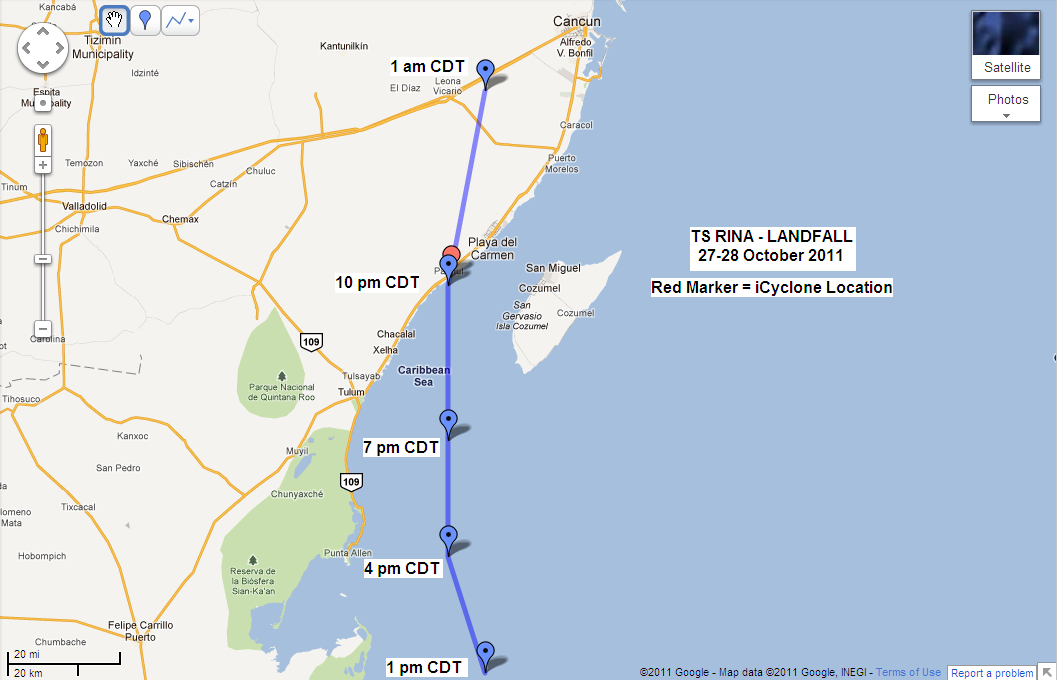 (Note:  The above chase map shows Rina's operational track.  In seasonal postanalysis, the landfall time was adjusted—see below.)

Note:  I sent these data to the National Hurricane Center, and in seasonal postanalysis, they shifted Rina's landfall time one hour earlier—to 0200Z (9 pm CDT)—to match my low-pressure time of 0212Z.

Here are two graphs of my data:

A barogram from the time I was at a fixed location (in Paamul). As mentioned above, in seasonal postanalysis, the NHC adjusted the landfall time from the operational 10 pm CDT to 9 pm (0200Z) to correspond better with my pressure data.  (Note: During the strong winds on the backside, I held the instrument high over my head to take wind readings—so that may have slightly affected the air-pressure values from ~10 to 11 pm.) 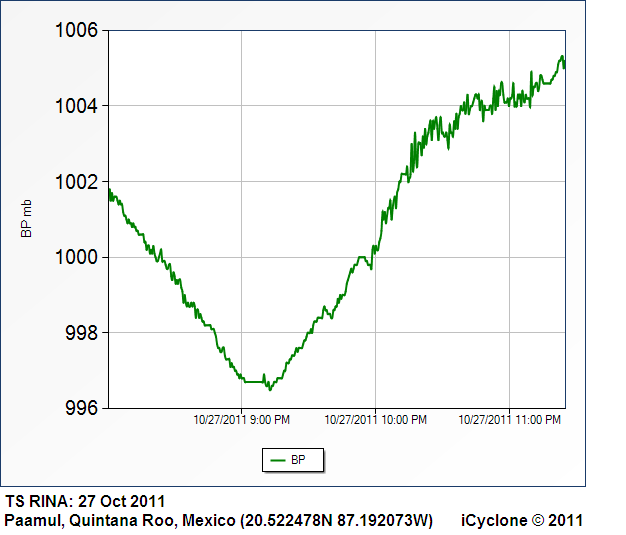 A wind trace for the hour that I took measurements—from ~10 pm to ~11 pm CDT. This was a period of suddenly vigorous winds—blowing from the SW—after the center/lull passed. During this time, I stood on the beachfront patio holding the Kestrel over my head (yes, continuously for an hour—my arms were aching from it). The sample rate was 30 secs, which is very low-res for wind data—a lot is missed. The patio was slightly elevated, so the height of the instrument was ~4 m; the winds were of course higher at the standard 10 m. These winds are nothing to write home about, but they show that Rina still had tight, vigorous surface circulation at this time. The highest winds at landfall occurred not where I was, but E of the center, in the vicinity of Cozumel. 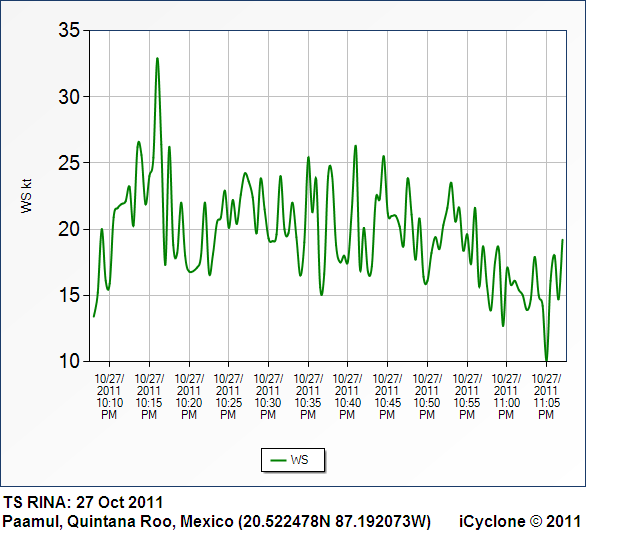 Don't try to match the two graphs vertically—they're showing very different sample periods! The barogram is a ~3.5-hr period, whereas the wind trace is just for ~1 hr within that time.