Vongfong hypnotized me—a Cat-5 super typhoon heading for Japan. And so my cameraman, Steve, and I rushed out there to chase it. But Typhoon Vongfong never delivered the fireworks. The cyclone unraveled as it moved N—a slow, steady demise that was painful to watch. By the time Vongfong's eye passed over us in Kyushu, the cyclone was a ghostly apparition of its former self. This was the second of two bad busts for me in the Western Pacific in 2014. (Little did I know that I'd come roaring back with two incredible back-to-back Western Pacific wins just 10 months later—see Soudelor and Goni.) 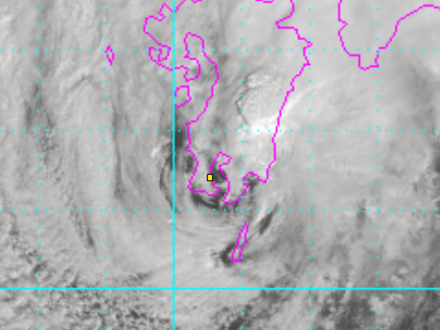 It felt like there was a hex hanging over this chase. It just never quite came together.

Fresh off our incredible Hurricane Odile chase, my cameraman, Steve, and I were ready for another big conquest—ready for whatever the typhoon would throw at us. Leaving LAX, we were motivated and set to go! 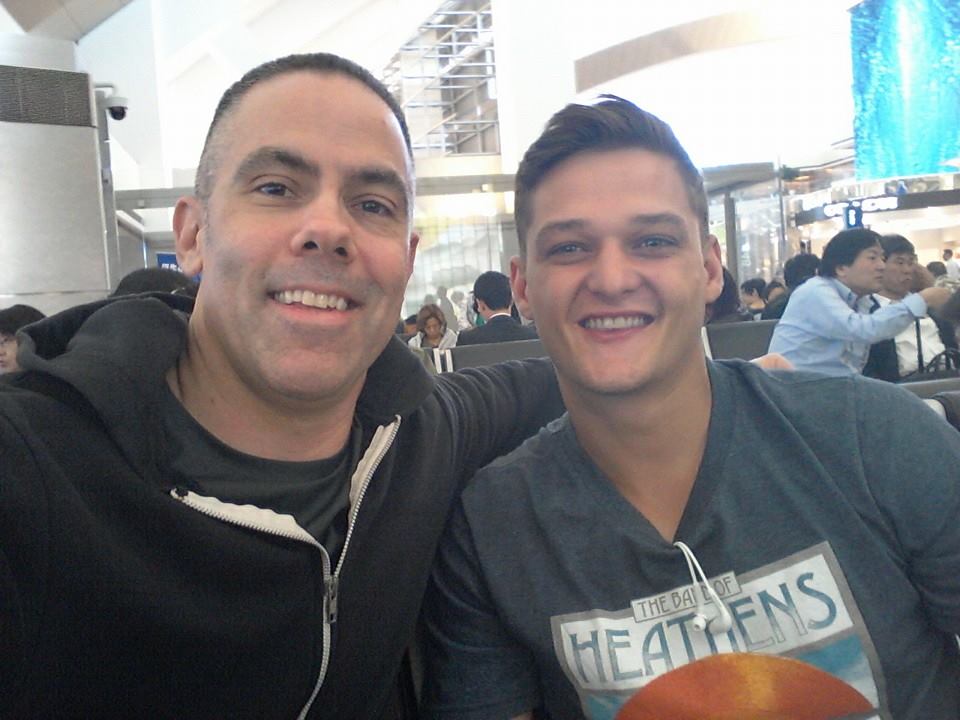 The original plan was to punch the typhoon's core on Okinawa-jima. But Vongfong's wind field was so huge that flights into Naha were canceled way in advance—so we couldn't get there. That was my bad for not getting us to Japan early enough—an amateurish chasing mistake. (As it turns out, we didn't miss much—Vongfong was already down to Cat 1 by the time it reached Okinawa-jima.)

Plan B was to catch the storm in Kyushu, the S-most of the four islands that make up mainland Japan. And so we caught a flight to the port city of Kagoshima and waited as Typhoon Vongfong approached... and slowly withered to a tropical storm.

Because the cycloe was so large, strong winds and heavy surf battered Kagoshima Bay more than a day before the center arrived. I was covering Vongfong for The Weather Channel in the USA, and so I did on-the-spot reporting from a bunch of locations S of the city, like Ibusuki. 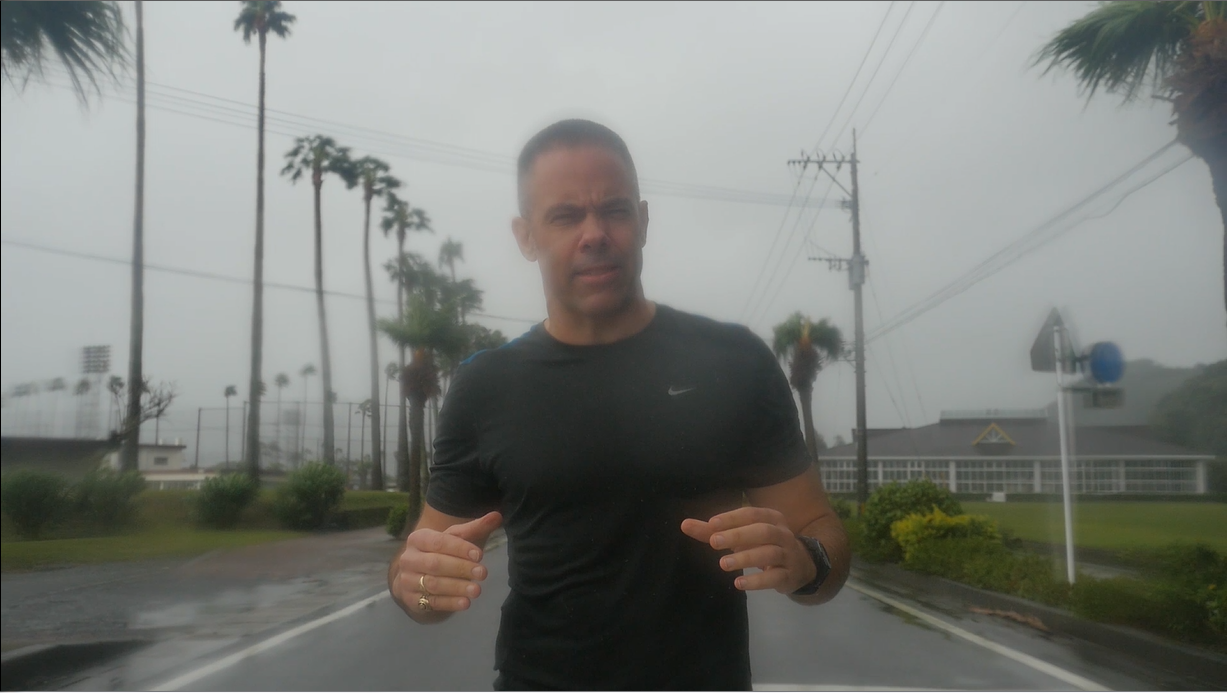 Meanwhile, folks in the city seemed to take Vongfong's approach in stride. 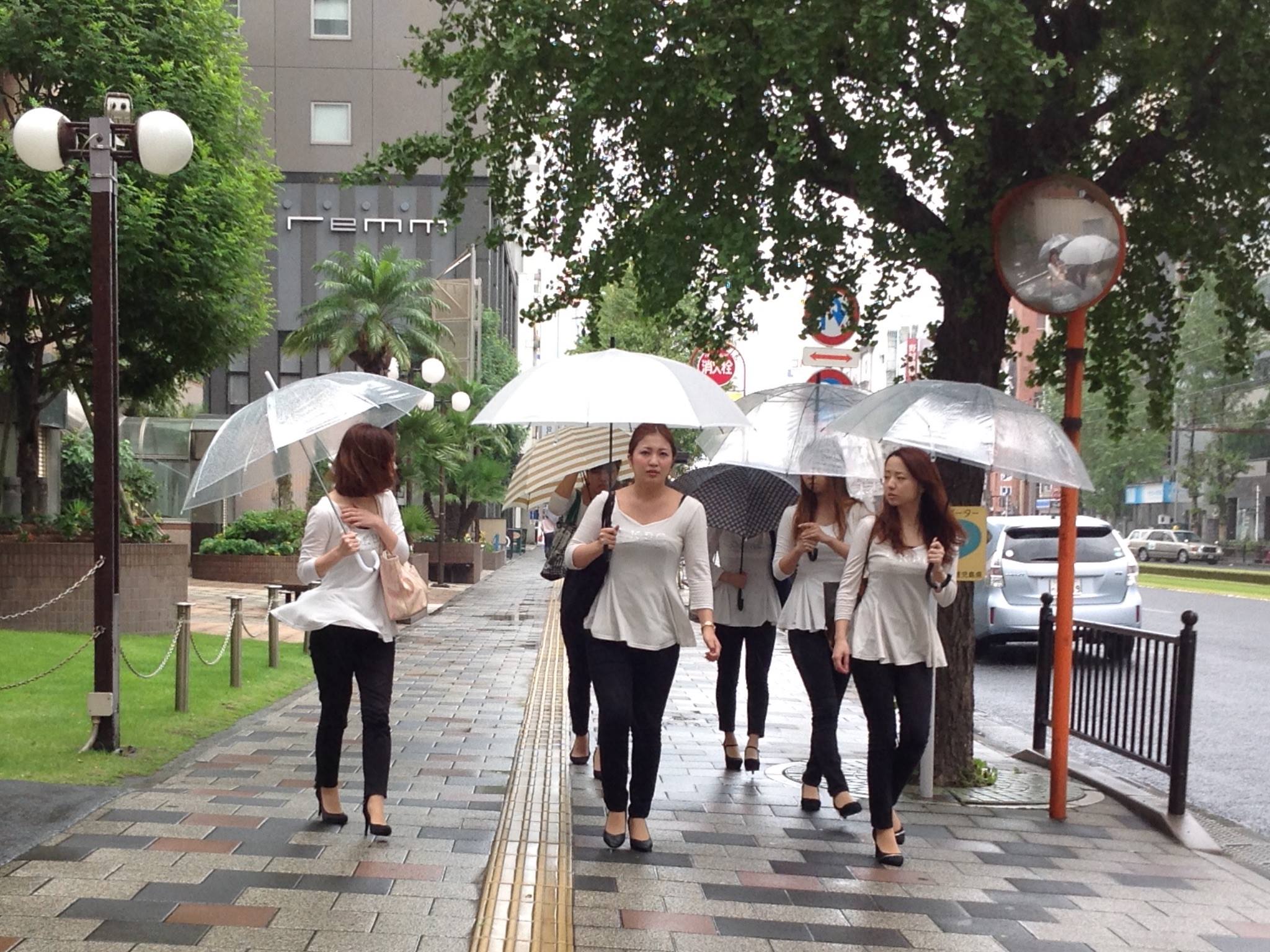 Very early the following morning, the ghostly remnants of this former super typhoon passed over us in Kagoshima Bay. We stayed in the port for a while, as heavy rain and gales swept through. But when we realized the cyclone was heading S of us, we drove down the coast to intercept the exact center. Although Vongfong had lost much of its deep convection, the remnant low-level swirl was still well-defined on visible satellite imagery—and in these shots you can see the center passed right over us (yellow box) between 9:30 and 10 am JST. 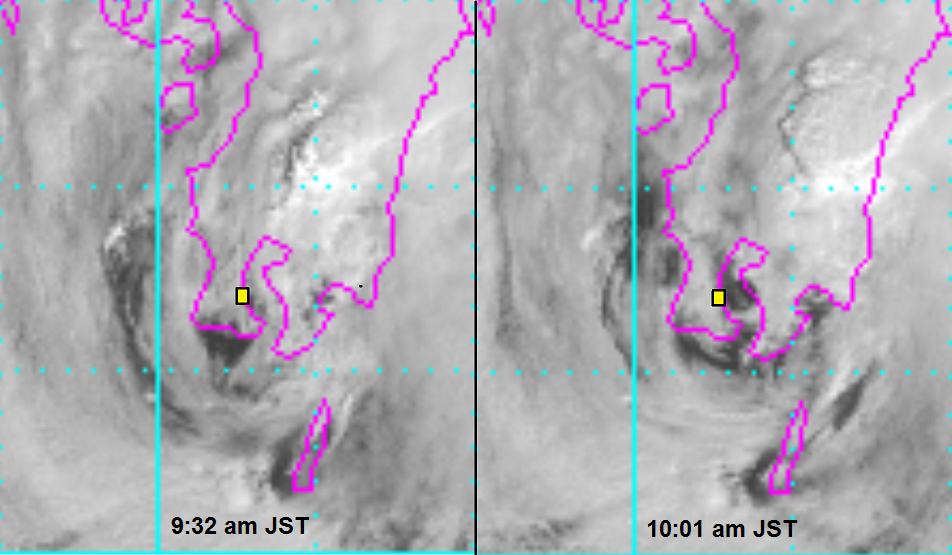 I left a Kestrel 4500 in my hotel room in Kagoshima, and I took another with me down the coast—so I was able to collect minimum pressure readings from both locations as Vongfong passed through. Not surprisingly, our chase location (green diamond: 6 n mi N of the exact center) had a lower minimum pressure than our hotel in Kagoshima (yellow diamond: 13 n mi N of the center). 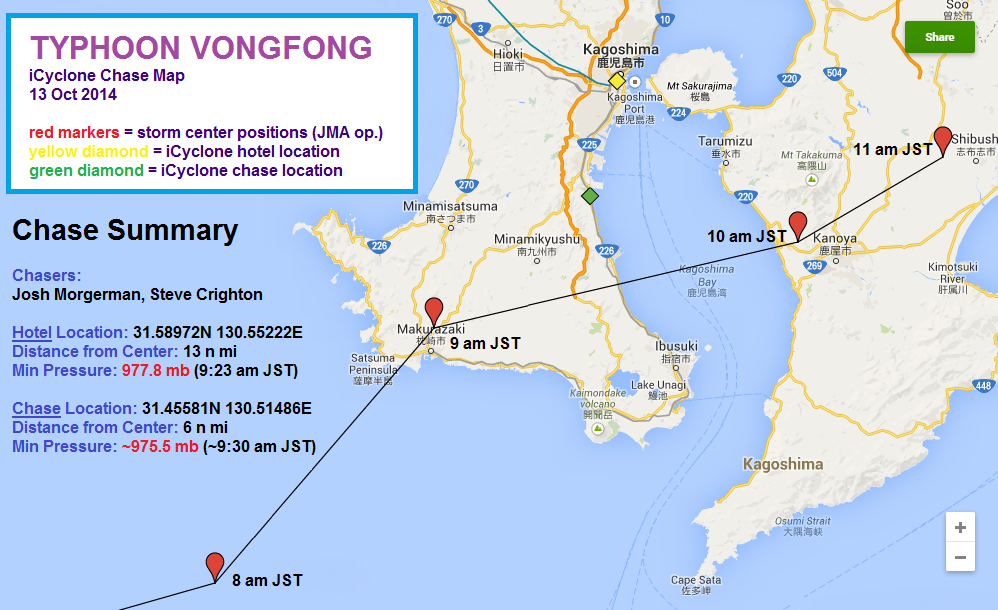 Vongfong was a pretty lame storm, I'll admit. But it had two magic moments... 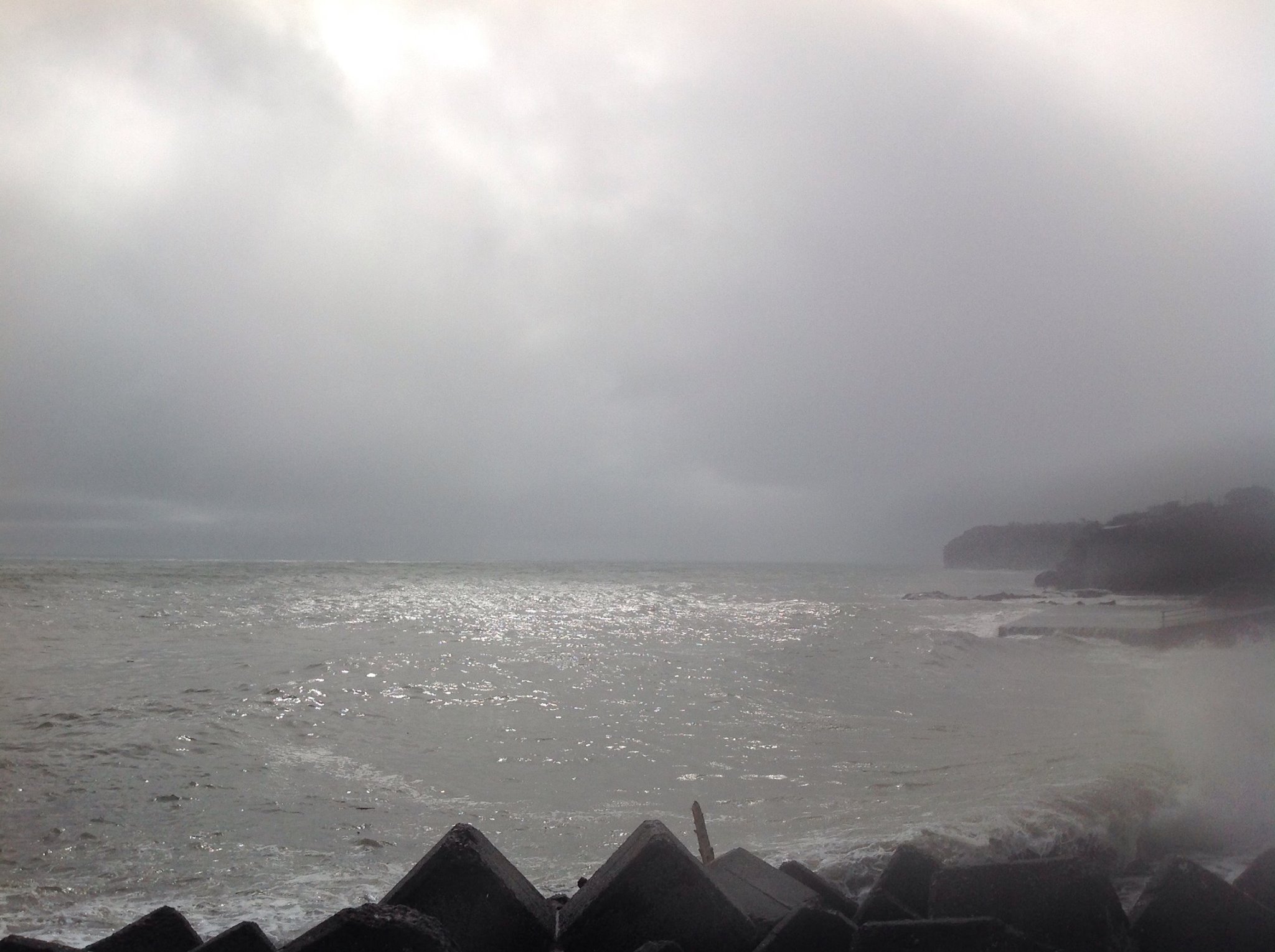 Soon after this calm, the pressure started to rise, the wind picked up, and it rained again.

The other awesome moment? The spectacular autumn afternoon the storm left in its wake in downtown Kagoshima. 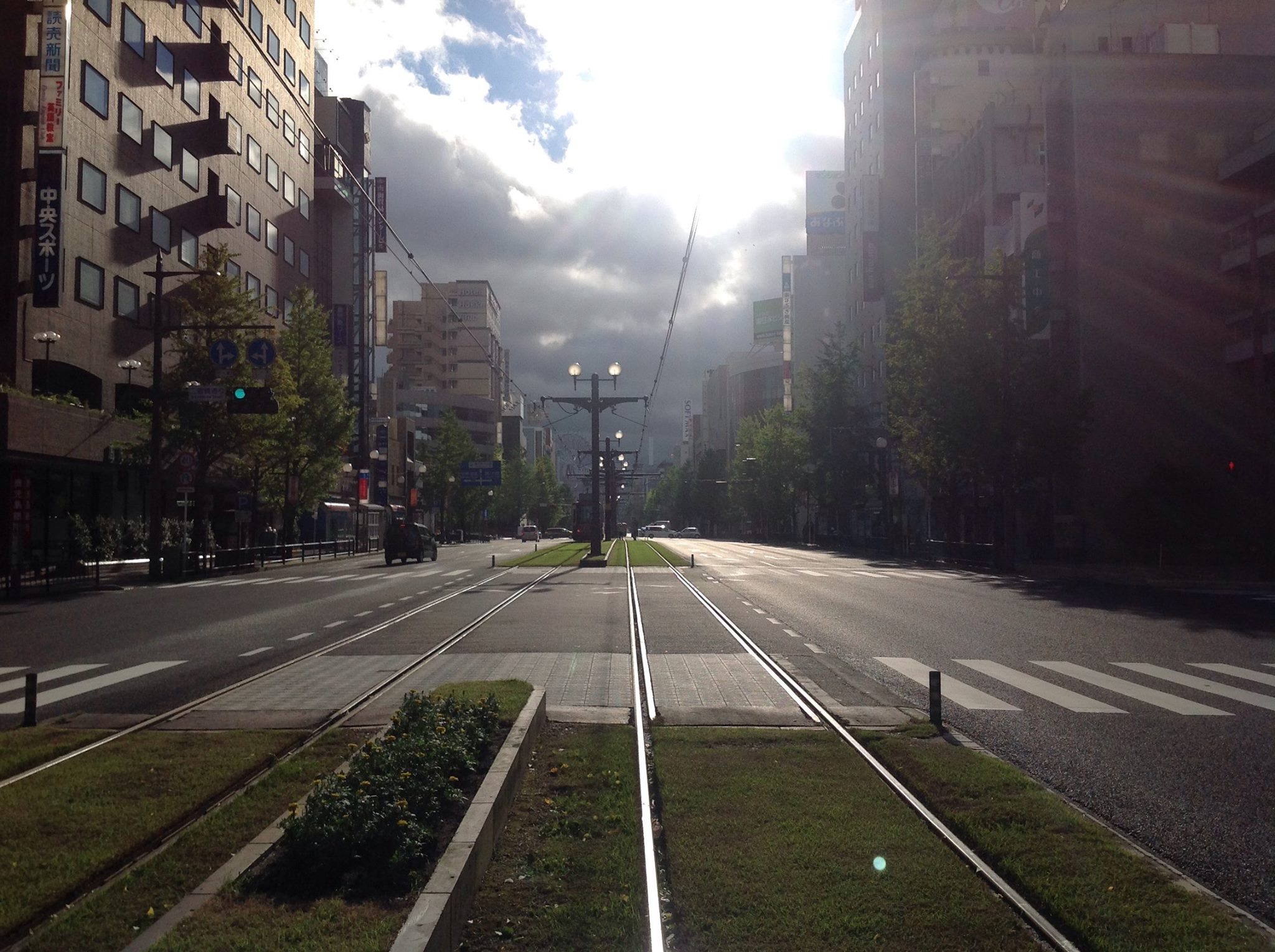