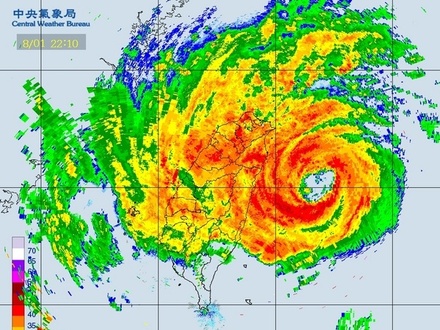 Typhoon Saola is strengthening as it approaches the NE tip of Taiwan, and my good friend, Hong-Kong-based James Reynolds, is there to catch the action.

Currently, the USA's Joint Typhoon Warning Center puts Saola's intensity at Cat 2, with winds of about 90 kt (105 mph)—and radar and satellite imagery suggest it's still strengthening.  While their forecast track keeps the center well offshore, Taiwan's official agency brings it much closer to the island.

British-born James Reynolds, who chases under the brand name Typhoon Fury, specializes in the W Pacific region, and—as to be expected—he's there on Taiwan's NE tip to catch the action.

One of the big choices James had to make on this chase:  whether to ride out the typhoon in Taiwan or on one of the nearby islands of Okinawa.  It was an agonizing decision, of course—and his resolution to chase the cyclone on Taiwan is not without risk.  But since Saola has a very large eye, it seems likely at least some of the core will lash the island nation's NE tip, even if the center itself stays offshore.  The good news for James is that the cyclone should reach its point of closest approach by daylight—which hopefully means some dramatic video for the rest of us to enjoy!

In the meantime, James reports that parts of Taiwan have already received a whopping 1.2 m—yes, that's meters—of rain from this system!  Yikes.

P.S.  In the N Atlantic, we continue to watch Invest 99L, which is so far exceeding expectations!  More on that later...