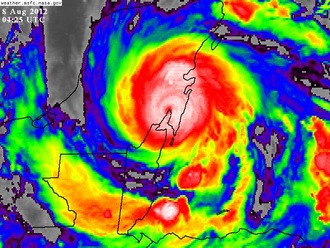 I honestly wasn't planning on chasing Ernesto. Scott Brownfield and I decided I wouldn't. But very early yesterday morning, the storm started to give me vibes—just the look of it on infrared satellite imagery.  And I knew I had to chase it.

I packed a bag and rushed to the airport—and then from Cancun rushed down the Yucatan Peninsula to meet Ernesto's tiny but powerful core as it roared ashore in the swampy darkness.

Like all chases, it will get a full write-up.  But here's the quick summary: 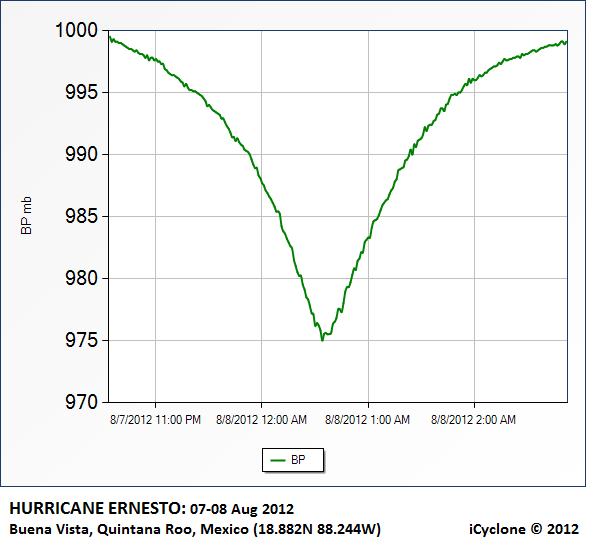 All of the above analysis is preliminary. I need to look at it all more closely—particularly my location with respect to the center.
Re: video... I shot some, but I don't know how good it is.  It was very dark and the conditions were not great.  I'll be reviewing the footage over the weekend, and I'm hoping to pull something together that captures the experience.
Big, enormous thanks to the iCyclone team—especially Scott, who deftly maneuvered me into position during those final, hectic hours.   He's a total pro.  This was a tough chase and it wouldn't have been as successful without Scott, as well as additional assistance from Adam and Steve.
—Josh Morgerman
**Note (09 Aug 2012):  Based on close radar analysis done after this entry was written, it actually seems the center may have passed just to the S—not the N.  Wind direction was not clear at the time due to darkness and my staying in shelter during the peak of the storm.  I need to review the video footage for clues.  A verdict will be made for the final report.  Either way, it was extremely close.