Today marks the 20th anniversary of one of the most intense hurricanes ever to strike the American coastline: Hurricane Andrew.

When it roared ashore just south of Miami, Florida, very early on the morning of 24 August 1992, no one at the time realized exactly how powerful it was. It was only a decade later that the National Hurricane Center's leading experts reanalyzed the storm and concluded it was a rare Category 5.  They estimated that sustained winds reached a whopping 145 kt (165 mph) when the intense inner core raked Miami-Dade County's southern suburbs—making Andrew the 3rd- or 2nd-strongest hurricane ever to hit the USA. (Hurricane Camille of 1969 hasn't yet been reanalyzed by modern researchers, so its exact intensity is still up for discussion.)

Floridians who rode out the cyclone's terrifying, pre-dawn onslaught would hardly disagree with this verdict:  the damage was simply shocking, with whole neighborhoods mowed down.

Michael Laca (of Tropmet), a veteran hurricane chaser with over 25 years of high-quality portfolio across the North Atlantic, is a top-notch historian of Florida hurricanes—and he's done some great work on Andrew. Check out his terrific video (above)—a valuable historical document that shows Metro Miami before, during, and after Andrew.  The storm footage—which Michael shot from very near the hurricane's inner core—is particularly striking: despite the early-morning darkness, the hollow wailing of the wind is haunting.

Also check out (and Like!) the Tropmet Facebook page. There's an awesome photo collection, 24 Days of Andrew, showing shots of the storm and the jaw-dropping destruction.

As we track Tropical Storm Isaac in the Caribbean today, it's good to step back and remember one of the mightiest storms in American history. 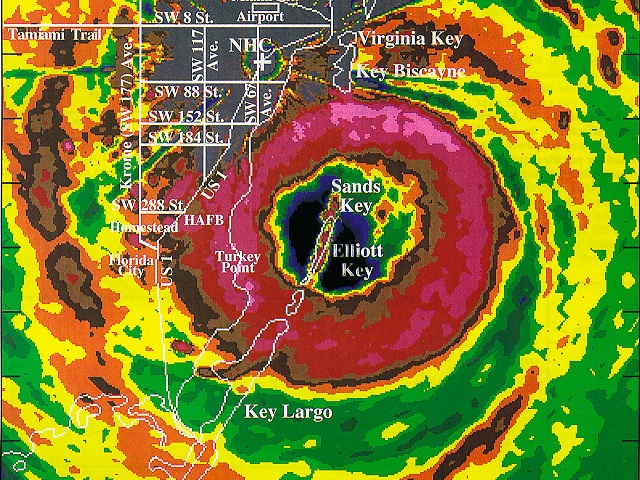