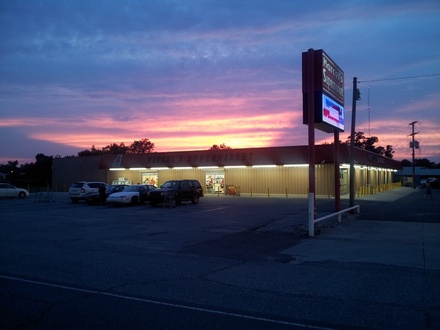 Just a quick update before I go to sleep.

Last night I drove from Gulfport, Mississippi, across Lake Pontchartrain and into New Orleans, then deep into the bayou country south of the city.

I arrived in Houma, Louisiana, at dawn. It's a rusty, ramshackle old Gulf oil city on a flat, swampy expanse—deep in the middle of nowhere, feeling somehow forgotten—like it's slipping off the edge of the earth. Completely exhausted after almost 24 hours of nonstop traveling, I checked into a hotel, did some work, and crashed.

After I awoke and did some errands, I spent the early evening doing a thorough exploration of the "chase zone"—the 40-mile-wide swath north and east of Houma through which Scott, Adam, Jorge, and I felt the cyclone's center was likely to pass. The exploration was actually a survey: I visited a variety of small swamp towns, noting all the things you want to know about a place before deciding to ride out a hurricane in it—elevations, buildings, infrastructure, overpasses and other "safe zones" (to retreat to in the event of a massive tidal inundation), and so on.

The bottom line:  this area between Houma and New Orleans is extremely low-lying, with some towns hardly more than 2 ft above sea level, and a lot of the buildings are old and rickety. Needless to say, this is risky chase turf.  A knowledgeable local—one of the housekeepers in my hotel—gave me a thorough rundown of which towns will go completely underwater even in a minimal hurricane. She should know—she was here for Katrina, Gustav, and others.

But all this might all be a moot point for two reasons:

This aside... Houma was buzzing this afternoon and evening as townspeople calmly filled up their gas tanks, stocked up on water, and prepared to be without electricity for days. These are the tough, hardened people of America's hurricane country—they've been through this drill many times and they face it bravely and stoically. A gorgeous, peach-colored sunset gave Houma a soft sort of beauty that I hadn't previously noticed in it.