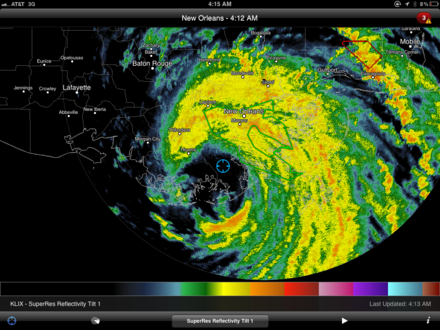 I'm back in Houma, Louisiana, after a real odyssey of a chase!

Tuesday afternoon, as Hurricane Isaac approached Louisiana, I made a last-minute (probably crazy) decision to head deeper into the swamplands to face the storm head-on. And so I threw my stuff in the car and headed E on Highway 24 and then S on Highway 1 as the rain started to come down hard.

My final destination:  a small bayou town called Galliano, about 30 miles ESE of Houma and just a few feet above sea level. I stationed the car in the large parking lot of a Catholic church on Highway 1, and that's where I rode out Hurricane Isaac's front side.

The storm built slowly throughout the afternoon as rainbands lashed the town. The cyclone's inner core moved in with the evening darkness, and that beautiful hurricane howl started up as the storm kicked into high gear. Hurricane winds blasted the town with ferocious energy for many hours, until finally, around 1 am, we started to have intermittent calms—separated by sudden blasts of wind—as we skated along the N edge of the eye for a couple of hours. I took advantage of the lull to relocate to the parking lot of Lady of the Sea General Hospital, since it's on slightly higher ground. We weren't 100% in the eye at this point, and when the cyclone wobbled S and the edge of the eyewall again moved over the town, fierce winds blasted the front entrance of the hospital as workers struggled to fasten cyclone shutters over the glass doors.

But around 3 am, the cyclone jogged N and that put us squarely in the calm.  A nurse—a black-haired Cajun dude with that distinct accent—came out to the parking lot and insisted I come in, which I did—and for several hours I chatted with staff and ate vending-machine food.

We were in the eye for a very, very long time—in fact, it wasn't until around 10 am that the cyclone's backside moved in. But by that time, Isaac had lost some strength and it slowly degenerated into a big, messy rainstorm throughout the day—winds were strong but no longer so dangerous.

Galliano was clobbered by Isaac, but got through it OK: despite the fallen trees, damaged roofs, and smashed signs, the levees held and it didn't flood too badly. But when I tried to head back to Houma, the cops turned me back:  the town was on strict lockdown and no one was allowed leave. So I spent the day killing time, sleeping in the car, shooting some video, and eating lunch in the hospital cafeteria.

At dusk, conditions had improved a little and I was desperate to get back to Houma. I didn't want to sleep in the car again. I drove back to the highway checkpoint.  It was no longer being enforced, so I slipped N into the rainy gloom.

The drive back was not easy—it involved a big detour due to fallen trees, navigating a long stretch of downed power poles, punishing rainbands, and conversations with five different cops—but I did finally get back to Houma, and was delighted to find my hotel had electricity!

This chase was difficult—in fact, I'd say it was one of the toughest ever, since Isaac kept us guessing until the end—but it was a success: I nailed the eye! The image here shows my location (blue symbol) as it passed over.

And it was a unique chase for a few reasons:

Big thanks to Adam, Jorge, Cory, and Bobby for their assistance behind the scenes—and also a thanks to Kennethb (on American Weather Forums) for his insider's knowledge regarding Louisiana geography and emergency ops, which were extremely helpful as I charted my course. And of course a very big and special thanks to my right-hand man, Scott!

A full chase account and video will be coming in the near future. For now, I've got to hurry to Atlanta for my flight back to L.A.