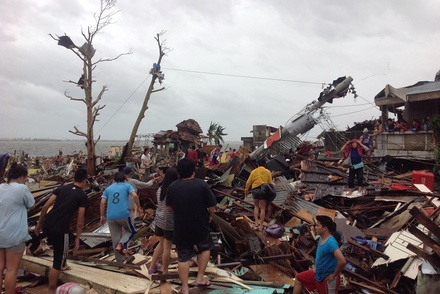 I just got home from my latest chase with James Reynolds and Mark Thomas—this one in the Central Philippines—and never have I felt more conflicted about a conquest. Here are two sides of Super Typhoon HAIYAN (referred to as YOLANDA by the Filipinos):

First off, Tacloban City is devastated. The city is a horrid landscape of smashed buildings and completely defoliated trees, with widespread looting and unclaimed bodies decaying in the open air. The typhoon moved fast and didn't last long—only a few hours—but it struck the city with absolutely terrifying ferocity.

At the height of the storm, as the wind rose to a scream, as windows exploded and as our solid-concrete downtown hotel trembled from the impact of flying debris, as pictures blew off the walls and as children became hysterical, a tremendous storm surge swept the entire downtown. Waterfront blocks were reduced to heaps of rubble. In our hotel, trapped first-floor guests smashed the windows of their rooms to keep from drowning and screamed for help, and we had to drop our cameras and pull them out on mattresses and physically carry the elderly and disabled to the second floor. Mark's leg was ripped open by a piece of debris and he'll require surgery.

The city has no communication with the outside world. The hospitals are overflowing with the critically injured. The surrounding communities are mowed down. After a bleak night in a hot, pitch-black, trashed hotel, James, Mark, and I managed to get out of the city on a military chopper and get to Cebu City via a C-130—sitting next to corpses in body bags. From a human-interest standpoint, Super Typhoon HAIYAN was utterly ghastly.

But from a chaser's perspective, it was an exceedingly unique conquest...

It's not everyday that a Category-5 cyclone makes landfall at an accessible location, during the day. Super Typhoon HAIYAN was one of these rare specimens—and we took full advantage of it by positioning ourselves in the path of its inner core.
When this radar image (below) was taken, the typhoon's intense N eyewall was pounding us in downtown Tacloban City. We felt we were inside a tornado, with swirling debris, zero visibility, exploding windows, trembling walls, and the sound of a train passing by.
It was the ultimate chaser experience and we won't ever forget it.
—Josh Morgerman 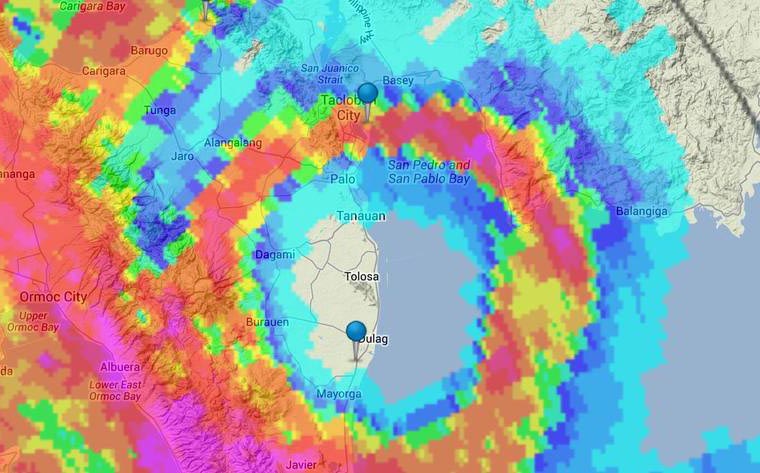