01 October 2013
Across the Pacific: Typhoon Temptation! 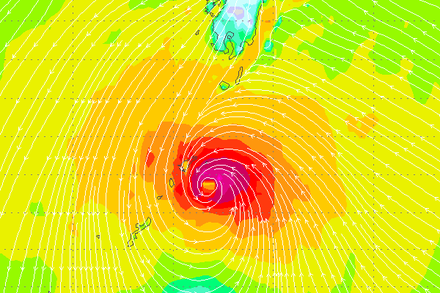 It's 01 October and the tropical waters around North America remain eerily quiet.  2013 will go down in history as a spectacularly dead hurricane season in the Atlantic—and a tepid one for the Eastern Pacific.

The Western Pacific hasn't had a stellar year, either—but it seems to be waking up! Typhoon WUTIP just hit Vietnam, and computer models are hinting that FITOW—a large cyclone currently festering in the waters E of the Philippines—might be the first of two powerful typhoons to threaten Japan's Ryukyu Islands in the coming days. And there are hints of more action after that.

I'd never given much thought to chasing typhoons on the other side of the Pacific. Besides being far away, East Asia isn't great chase turf. Jagged mountain ranges, widely-separated islands, sparsely-settled jungles, bad roads, and Communist governments create dizzying logistical challenges.

But the current cyclone drought on our side of the globe has expanded my mind a little—created a temptation to head W and try something new. This image—the 00Z ECMWF's depiction of Typhoon FITOW raking Japan's Amami Islands in 96 hours—is like waving candy in front of a famine victim's face.

And I've also drawn inspiration from James Reynolds, of Earth Uncut Productions. Based in Hong Kong, James has had tremendous success chasing typhoons all over East Asia this past decade—including last year when he punched the cores of three typhoons in a row on Okinawa Island! He's the world's leading chaser in this region, and he's been giving me some logistical pointers these past couple of days. Should I leave California to chase this upcoming typhoon, it will be the first time these Western Pacific and Eastern Pacific dudes meet face-to-face. Exciting times, indeed! :)