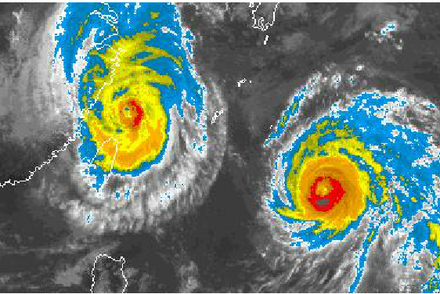 For the first time ever, I have to wrap-up one chase and talk about the next in a single, breathless post!

Typhoon FITOW hammered us hard in Miyako-jima Saturday afternoon and evening. We spent the afternoon exploring the rural N reaches of the island, and got back into the main town just as the storm’s inner core started to rake the island with hurricane winds.

On the W coast, the wind was coming full-blast right off the water. Near our waterfront hotel, streets perpendicular to the beach became violent wind tunnels, blasting sea spray, rain, large debris, and at one point even a poor little dog down the streets at great speeds. Cars parked in a nearby lot bobbed up and down and shifted in the gusts. I tried to take wind measurements and was almost blown away.

The action was intense in the late afternoon, but it cranked to a ferocious level late at night, as the cyclone’s large eye inched closer and the intense SW eyewall raked the island. The howling increased to almost a scream, and Miyako-jima was plunged into darkness as the power failed.

But a little after 11 pm, we noticed the wind started to lose a little of its edge—seemed a little less angry—and the rain tapered off. And we wondered if we were clipping the S edge of the eye. As I retreated to my dark hotel room after 12 midnight, the wind was still howling on and off—but I was so exhausted I drifted off to sleep anyway. (I’m not sure if we were skirting the eye then, but radar images suggest we did briefly in these wee hours.)

Morning was grey and windy. Houses, buildings, signs, and power poles in Japan are all built very sturdy, so you don't see a lot of structural damage after storms. However, cars in the parking lot next to the hotel had been shoved together like toys—a brute reminder of the how strong those winds got. Estimates from both the JMA and JTWC indicate Typhoon FITOW had winds of 85-90 knots as it passed by Miyako-jima—a Cat 2 on the intensity scale we use in the Atlantic.

Anyhow, we had no time to linger! By 12 noon, James Reynolds, Mark Thomas, and I were on a flight back to Okinawa—to get into position for…

FITOW has a younger sibling following right behind. Typhoon DANAS will accelerate rapidly into the Ryukyu Islands late today and then recurve into mainland Japan tomorrow.

We’re going after DANAS. And this chase will be tough for the same reason that FITOW was tough: because we’re confined to small islands.

But the similarities end there. Compared with its older sibling, Typhoon DANAS is smaller, stronger, and moving much faster. We’ll have to make snap decisions and move fast in order to punch the core of this one.

Exactly where’s it going? The latest computer modeling suggests the typhoon’s center will pass very close to Okinawa Island—perhaps just N of it—late this afternoon. Given this, our initial plan is to stay on the island and drive to the N tip. If the cyclone moves further N than expected this afternoon, we may try to get on a flight to Amami or Tokunoshima Islands.

We rode out the core of Typhoon FITOW on 05-06 October. If we manage to get in the core of Typhoon DANAS today (07 October), that will be two different typhoons in two consecutive days. We aren’t aware of any other chasers having pulled this off, and so we hope to make stormchasing history achieving this feat!

I should point out that the odds of a successful chase today are 50-50.  The typhoon could easily miss Okinawa Island to the N—and too late in the game for us to compensate with a position change.