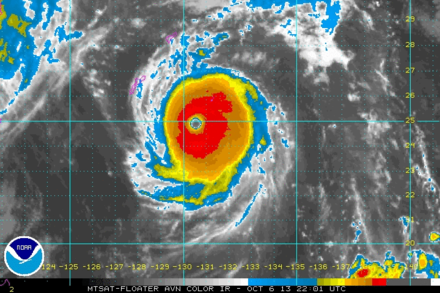 It's morning here in Naha, Okinawa, and we have a rather provocative scenario developing—a powerful typhoon accelerating in our direction.

Typhoon DANAS looks to be strengthening and has a gorgeous, tight little structure, with a distinct eye and eyewall. In fact, the JTWC now puts the intensity at a strong 105 knots (120 mph), and they forecast it to get up to 115 knots (130 mph) later today, as the center crosses the Ryukyu Islands. That's a Cat 4 on the scale we use in the Atlantic.

So, many of the indicators are pointing to a rather provocative scenario for chasers: the landfall of an intense cyclone during daylight hours.

Many things in this scenario can go wrong. It's a tease—plain and simple—and we can't get too worked up over it.

We need to just stay cool and head N—to the N tip if Okinawa Island.