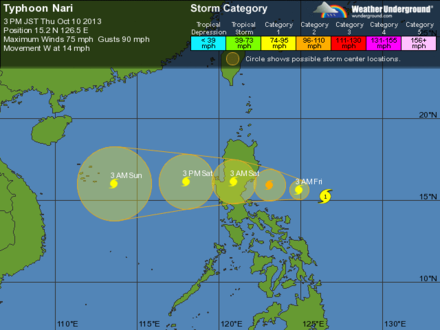 My trip to the Western Pacific to chase typhoons has been amazingly productive. I had a feeling when I flew over here last week that there could be multiple chase opportunities—but I didn't expect them to pan out so well.

And all the action means I'm once again dreadfully behind in my updates. So, to get caught up...

This one is going to go down as one of my more memorable chases. How can't it? A direct hit from a strengthening Cat 4, in an exotic location, right near the waterfront is going to stick in your memory—not to mention the almost pornographically perfect radar and satellite images of this typhoon.

Typhoon DANAS was special—the kind of cyclone I've spent years fantasizing about. It looked so good it kind of scared us. As James Reynolds, Mark Thomas, and I drove N—up to the top of Okinawa Island—on that grey Monday afternoon to punch the typhoon's violent inner core, we had mixed feelings. Each new radar frame looked more dangerous. The inner eyewall contracted and turned into what seemed a perfect red circle of violent wind and rain—heading right for us.

A little before 2 pm, we reached our destination—a waterfront school, about 100 yards from (and 10 ft above) the sea, very near the N tip of Okinawa Island, in the town of Oku (26.841N 128.289E). We parked the car in a tight space between two buildings and set up in one of the school's downwind stairwells.

The wind made a peculiar, ghostly howl as it blasted right off the open ocean, across the school grounds, and into the surrounding hills. And during the next hour, the wind got so strong it was dangerous to walk on the seaside balconies, and the charcoal, angry ocean was barely even visible through all the turbulence. By 3 pm, the sky to the E was brightening as we entered that final moat between the inner eyewall and the outer bands—but the winds continued to rev up as the typhoon's center approached. The pressure was in the 970s mb and falling rapidly. A Plexiglas window blew out, and the plastic sheet blew around like a flying guillotine. It became too dangerous to leave the immediate protection of the school's downwind walkways. I called James H. (who was analyzing radar for us back in the USA) at 3:15 pm to get his take, and all he said was: "The eyewall's just about on you—minutes away. Look out!"

Sure enough, within minutes, things went nuts. High-intensity, roaring bursts of rain and wind swept over us—so dense and heavy that we had moments of total whiteout, like a blizzard. (James and I agreed afterward that it was the heaviest eyewall rain either of us had ever seen.) Particularly concerning: the wind's direction was wild and unpredictable during the most ferocious blasts, so that debris flew around randomly and I worried one of us might get blown off the second-story balcony where we were trying to film.

But suddenly at 4:04 pm... It calmed! Not a complete calm—but almost. Like, a big, sudden pause in the action. The rain slackened to a light drizzle so that we could see across the school grounds again. The shredded trees stopped dancing. The wind dipped to maybe 10 or 20 knots, and it seemed almost confused... like it didn't know which way to blow. We celebrated as we realized we'd made it into the outer edge of the typhoon's eye—the second one within 48 hours! The lowest pressure of 950.6 mb occurred at 4:14 pm, confirming that this was the center's closest approach.

The celebration was short-lived. The wind quickly reversed (from NE to SW) and cranked back up to full throttle by 4:10 pm or so. Over the next 20 minutes, it alternated between big, roaring gusts and comparative lulls as we apparently skated along the edge of the typhoon's eye—then we got back into steadier storm conditions as the center pulled away... and by 5 pm, it was basically over. Typhoon DANAS was a vicious Cat 4—but it was also tiny and fast-moving.

The evening trek back down Okinawa Island was cold, wet, and dark—and several times we had to get out of the car to move trees blocking the road. But we made it back to Naha by mid-evening, and the city—which was spared any real impact from severe-but-small typhoon—was open for business. Nothing like a hot meal after a chase! And nothing like a hot meal to plan...

It's becoming a bit embarrassing, but yes, we are chasing another typhoon!

Even during the Typhoon DANAS chase, we new there was another was on the horizon. We could see it in the computer models. "Number Three"—as we referred to it—looked to be much further S.

And so the threat has materialized. Typhoon NARI (called SANTI by the Filipinos) is brewing in the Philippine Sea and it's forecast to strengthen and move W, into Luzon. James Reynolds and I plan to fly into Manila tomorrow morning (him from Hong Kong, me from Taipei), where a driver will pick us up and bring us N, into the Luzon jungles.

Right now, we believe landfall should occur in Baler Bay, somewhere between Baler and Casiguran, late tomorrow or early Saturday. Our exact chase route will depend on the speed and direction of the typhoon:

If we successfully penetrate NARI's core in Luzon, we'll establish another record: three different typhoons within one week. This is a testament to how extremely active the Western Pacific can be. It's just a sausage machine of cyclones!