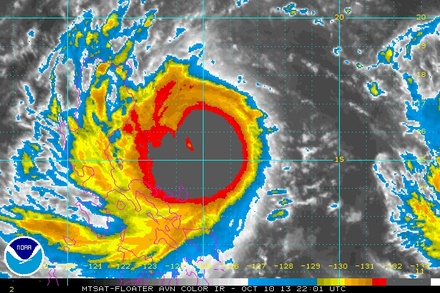 Good morning from Taipei, Taiwan. The Typhoon NARI chase is on!

I’m at the Taipei Airport, about to hop on a flight to Manila, Philippines. There I’m going to meet up with James Reynolds, who’s flying in from Hong Kong—and form there, we have a car and driver arranged to take us N, into the Luzon state of Aurora, to chase the typhoon.

Right now, NARI is strengthening, with extremely deep convection wrapping around its center as it heads quickly W, toward the Luzon coast. The JTWC currently puts the intensity at 85 knots—a Cat 2 on our scale—and they bring it up to almost a Cat 3 before landfall.

Landfall timing and location is a question.

The JMA and JTWC differ significantly—with the JTWC further N around 8 pm tonight and the JMA further S around 4 am tomorrow morning. This is important to us, as it affects our plans.

The JTWC track would probably necessitate an inland chase in Cagayan Valley. While we prefer to get cyclones coming right off the ocean, at peak intensity, a benefit to the inland-chase scenario is more cities and roads—and therefore more ability to refine our position in order to get in the eye.

The JMA track brings the typhoon’s center ashore near the town of Baler, which is quite accessible—and an added benefit is that we’d have additional time with this scenario. If this one plays out, we’ll head to Baler.

Right now, it’s not clear which scenario is going to play out. It could be a combination of the two. For now, it doesn’t matter. Our plan for this afternoon: head N out of Manila. We don’t really need to make any hard decisions until we get to around Cabanatuan City.

I’ll update from the road as much as I can. James—who’s chased in Luzon before—tells me it’s much different than Japan, without the same degree of infrastructure and data coverage.

No worries—we’ll make it work!