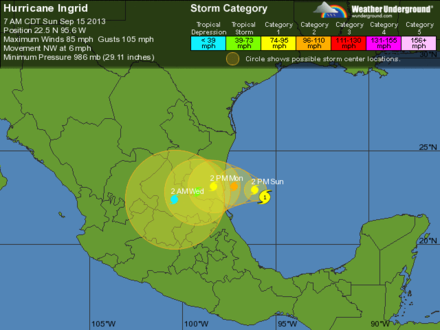 Jorge and I are in Monterrey, and we're going to meet up in a couple of hours to head S, into the neighboring state of Tamaulipas, where Hurricane INGRID will come ashore tonight or tomorrow morning. Once there, we'll scout locations along the coast for riding out the cyclone.

INGRID had a rough night as shear from Tropical Storm MANUEL—in the Eastern Pacific—eroded the W flank of the cyclone. Despite this, INGRID maintained deep convection over its center, and the winds have stayed constant—a sign that this cyclone is a real fighter. As MANNY moves inland and dies over the hills of Michoacan, the shear should lessen, and INGRID may strengthen as it approaches the coast.

Our goal with INGRID is the same as it is on all iCyclone chases: to get in the exact center of the hurricane as it comes ashore—to get through the inner ring of dangerous winds and rain and right into the center of the calm eye. In our strange sport called hurricane chasing, this is hitting the bull's-eye.

Radar is the chaser's best tool for navigating with such precision. Unfortunately, we might not have this luxury with INGRID, as the cyclone's inner core may slip right between the Alvarado and Brownsville radar sites—in which case, we'll need to rely on other tools, such as recon fixes, satellite imagery, air pressure, wind direction, and of course luck! Scott and I are discussing the Plan-B options.

By the way... The iCyclone team has a remarkable batting average for punching the cores of the hurricanes we chase. Of the last 12 chases, we've gotten in the eye or at least the inner eyewall of all but one hurricane—and that was Cat-5 Hurricane DEAN of 2007.