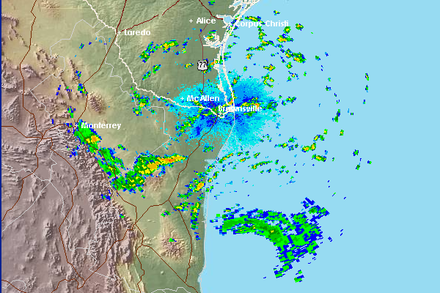 After a painfully slow buildup, the Hurricane INGRID saga is now rapidly evolving.

Jorge and I had a leisurely dinner in downtown Tampico this evening—especially festive because of Mexican Independence Day celebrations happening in one of the main city plazas. After getting extra gas and water, we turned into our hotel, planning to get some sleep before heading up the coast at dawn.

But when I checked the Brownsville radar loop, I became slightly alarmed: INGRID's eyewall was surprisingly close to the coast! This required me to wake up Jorrge and also get Scott on the phone for an 11th-hour strategy call—during which we used the satellite view on Google Maps to pore over every inch of the Tamaulipas coastline between 23.0N and 23.5N, looking for towns.

This might seem like splitting hairs, but we want to be exact and get right in the hurricane's center, as close to the coast as possible. (Since this cyclone probably won't be the most forceful, we're treating it like a skill game.)

This isn't as cut-and-dried as it may sound.  First off, the cyclone is almost out of the Brownsville radar range, so—as Scott points out—there's most certainly some spatial distortion at these distances.  Second, a cyclone's eye typically wobbles as it comes ashore, and we're still not clear on whether INGRID will be moving due-W or WSW at landfall.  We just need to be nimble and flexible.

Our revised plan is to hit the road at 3:30 am and head N. Exact destination is to be determined, as I'm sure we'll be refining it to the very moment of landfall today.

We'll give an update later this morning, from the road.