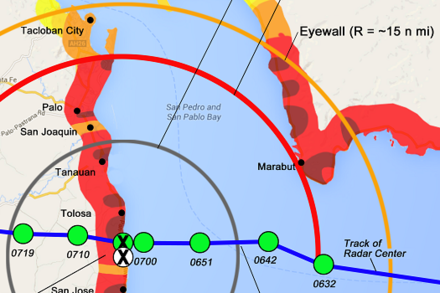 HAIYAN struck a region of the world that isn’t covered by reconnaissance aircraft. The few weather stations in the typhoon’s landfall zone delivered sparse, incomplete data from the event. The nearest radar site, Cebu City, is ~80 n mi from the landfall point and >85 n mi from Tacloban City. Much of the stricken region is sparsely populated, with many residents living in small villages, in poverty.

Given all this, we're still learning about what happened in the typhoon’s direct-impact zone—that is, the stretch of Leyte coast stricken by the typhoon’s inner core.

This report attempts to add to the growing body of knowledge about this typhoon’s meteorological impact in Leyte.

I was in Tacloban City during the typhoon, collecting data, recording the event on time-stamped video, and making detailed observations. I returned to the region in late February and early March 2014 to research the cyclone’s impact in Leyte and Samar, including ground surveys of the damage and interviews with scores of survivors in a dozen towns. These two expeditions—during and after the typhoon—form the basis of this report.

But I want to emphasize that this report is not comprehensive. It simply documents the data and information I was able to collect on the ground, in Leyte and neighboring Samar, during and after HAIYAN.

I hope people studying the impact of Super Typhoon HAIYAN will find this report helpful, and that it will be a useful addition to the body of knowledge about this historic storm.