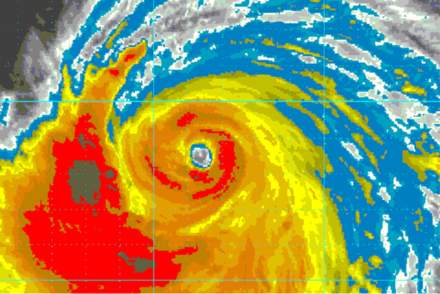 For years I'd say—with intense conviction—that I hated island chasing. I'd say the worst thing I could imagine was being stuck on a little island while a gorgeous eyewall passes just a few miles out of reach.

And yet... I've become an island chaser. Complete desperation (caused by North America's hurricane drought) drove me out to the Western Pacific for the first time last year, and four incredible chases convinced me the whole island chasing thing ain't so bad after all—that you can win at that game. Sometimes.

And so I find myself on Japan's Okinawa Island this afternoon as Typhoon NEOGURI slowly intensifies and draws closer.

I didn't want to chase this one. The timing is bad, it's too early in the season, it's risky as hell, etc. etc. I was full of excuses. But the Euro and GFS were showing such a monster, I couldn't risk missing it. As if I had no control over myself, I jumped on a plane Saturday night to fly from Los Angeles to Naha—and here I am.

I met up with Mark Thomas at the airport, and James Reynolds is arriving in the next hour. This is our first chase since the devastating and life-changing Super Typhoon HAIYAN, and it's nice to see our trio reunited. We've been through a lot together and we team up well.

Of course we have to talk strategy tonight—and the main topic will be: Which island? The models have nudged a tad W of Okinawa Island, suggesting we may want to hop over to one of the other ones tomorrow morning. The nice thing is that we don't have to decide just yet. I feel confident the cyclone's core will pass between Miyako-jima and Okinawa Island—but where exactly remains a question. We're once again playing Island Roulette.

And the stakes are high—because if we hit NEOGURI's core, I'm pretty sure it's going to be an extreme experience.

Walking around Naha today, you'd never guess a violent storm was threatening this city. It's a sunny, stiflingly hot, calm afternoon, and the streets are full of pedestrians out enjoying their Sunday.