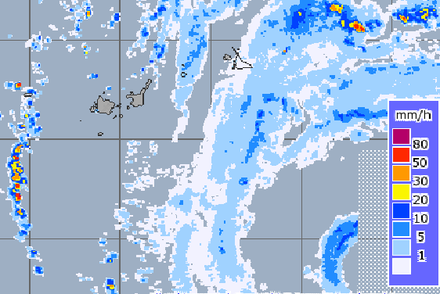 I'm in Miyako-jima—in an 11th-floor hotel room overlooking the sea. The wind is howling and hissing, and the windows occasionally rattle.

But the typhoon's center is still at least 12 hours away. As is typical of these big Western Pacific cyclones, Super Typhoon NEOGURI has an enormous wind field, and we're already well inside it. Walking outside is difficult, and the airport has already measured a gust to 56 knots. Both my devices read 988.8 mb and falling. The cyclone's eye has just crept into view on radar, inching closer with each frame.

The decision to come to this island was not easy—the result of a tortured analysis on the ticketing line at the Okinawa airport. And it was a bit of a plot twist, as we'd been leanding toward Kumejima. James, Mark, and I actually went to the airprt and waited on line not knowing if we were buying tickets to Kumejima or Miyako-jima.

After much handwringing, we chose Miyako-jima because: 1) The 00z GFS continued the W trend, bringing the eye almost over Miyako-jima (see image)—and that W trend has been consistent these last couple of days. 2) After a N jog during the morning, the cyclone was pushing more W again. 3) Miyako-jima would get the storm by daylight. 4) While it's always nice to be right of the center, we were concerned Kumejima might just be too far. So... Miyako-jima.

It was a tough decision, but we believed it was the best one, given the information we had.

The flight to the island was turbulent and bumpy—strong winds were already sweeping the Ryukyu islands, and I could see major wave action in the sea below. The landing was rough—the plane dropped like a rock, it seemed—and an outer rainband lashed the island with torrential rain as we drove to the hotel.

Once checked in, we walked into town for dinner. The mood darkened as satellite loops started to show a distinct N jog in the typhoon's track—one that threatened to bring it well E of the island and right to Kumejima—the other option we considered this afternoon. (Talk about salt in the wound.)

As I sweat this out tonight—obsessively refreshing the satellite and radar loops and microanalyzing every signal, wondering if we picked the wrong place and lost at Island Roulette—I'm reminded what an incredible rollercoaster this whole sport is. You score a big one, and you're on top of the world; you miss and you feel beaten down.

The verdict is out on NEOGURI. But the cyclone doesn't look very healthy in the latest satellite imagery. The core convection is remarkably thin for a presumed super typhoon, and we wonder if the storm's being hyped a bit.

Even so... as that wind howls and those windows rattle, I'm reminded why I chase. I just dig the scary energy of a cyclone—the feel of it, the sound... So it's all cool.

I want to sleep for a few hours, but that seems unlikely.