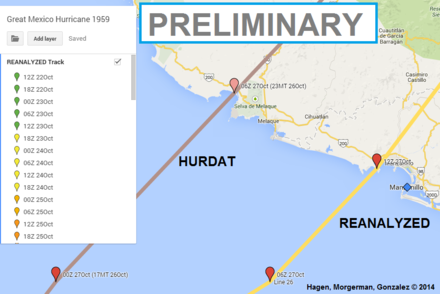 Today is the 55th anniversary of the Great Mexico Hurricane of 1959—the most tragic of all Pacific coast hurricanes in Mexico. The monster cyclone devastated the port city of Manzanillo and went on to cause catastrophic inland flooding, killing an estimated 1,800 people.

And today our reanalysis team announces the preliminary results of our detailed study of this historic storm. After careful review of all available evidence—ship reports, official data, eyewitness accounts, scientific journals, synoptic maps, and newspaper articles—we’ve concluded that this was a small, extremely severe Category-4 hurricane that came ashore at the W end of Manzanillo Harbor.

The cyclone was not only very severe—it was quite small. We estimate a RMW (radius of maximum winds) of only ~7 n mi and an eye radius of ~5 n mi at landfall. This small size provided little comfort for Manzanillo, as the port city received a direct hit, with the E edge of the calm eye and max winds passing right over them.

This storm has long been considered the only Category-5 landfall in the Eastern Pacific. Despite this longstanding distinction, we were unable to find any evidence to support Cat-5 intensity—thus our conclusion. Even so, the Great Mexico Hurricane of 1959 retains its crown as the most-intense landfall on Mexico’s Pacific coast, tied with MADELINE of 1976.

Lead author Andrew Hagen (ImpactWeather), Josh Morgerman (iCyclone), and Jorge Abelardo González are now working on a formal paper that documents the complete reanalysis and the reasoning behind our findings—so we can present our work to the National Hurricane Center’s Best Track Committee. Remember, at this point our verdict represents our opinion only—it’s not official unless the Best Track Committee decides to accept our findings.