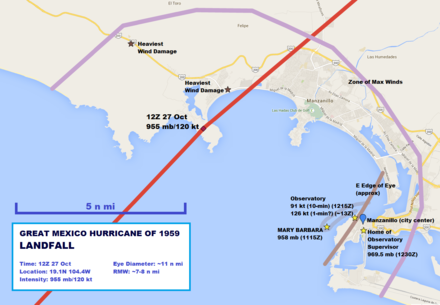 I'm pleased to announce the completion of our reanalysis of the Great Mexico Hurricane of 1959, as well as the National Hurricane Center's official acceptance of our findings.

This intense cyclone—also known as the Manzanillo Hurricane—is the most tragic of all Pacific coast hurricanes in Mexico. It devastated the port city of Manzanillo and went on to cause catastrophic inland flooding, killing an estimated 1,800 people.

We believe ours is the deepest study ever performed on this historic cyclone. Our exhaustive research turned up a wide range of sources in Mexico and the USA: ship reports, synoptic maps, official data, old government archives, science journals, newspaper articles, eyewitness accounts, personal and official letters, a book, and even conversations with Mexican government personnel. A close analysis of these sources led us to conclude this was a small, extremely severe Category-4 hurricane that came ashore at the W end of Manzanillo Harbor.

Our reconstructed track presents significant changes from the traditional HURDAT record of this storm:

This hurricane has long been considered the only Category-5 landfall in the Eastern Pacific. Despite this longstanding distinction, we were unable to find any evidence to support Cat-5 intensity—thus our conclusion.
This new official landfall intensity lowers the Great Mexico Hurricane of 1959 to No. 3 on the list of strongest hurricanes on Mexico’s Pacific coast—after No. 1 Hurricane PATRICIA of 2015 (130 knots) and No. 2 Hurricane MADELINE of 1976 (125 knots). (However, MADELINE has not yet been reanalyzed and this landfall intensity may change.)
Andrew Hagen (StormGeo), Josh Morgerman (iCyclone), Erik Sereno Trabaldo, and Jorge Abelardo González researched and wrote the paper, with Hagen and Morgerman presenting and defending the paper's findings before the National Hurricane Center’s Best Track Committee.